Aid pouring in for Syrians in Turkey during Ramadan 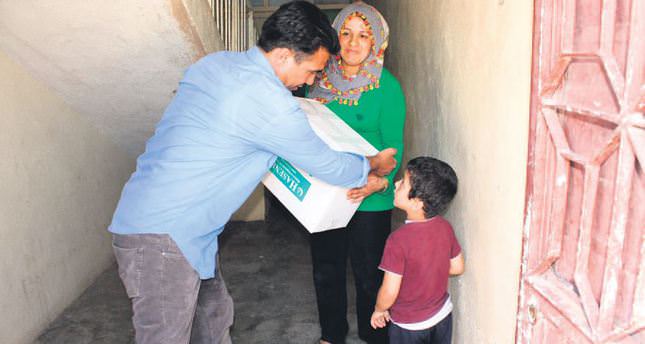 by Daily Sabah Jun 28, 2014 12:00 am
Many Syrian Muslims who fled to Turkey to escape the conflict in their home country will welcome the Islamic holy month of Ramadan either in tent camps or in abandoned buildings and empty lots where they have been forced to live.

Ramadan, described a month of plenty by the Muslim faithful, will see aid pouring in for impoverished Syrians, many of whom left everything they owned in their home country.

A group of charity organizations has joined forces to run an aid campaign for displaced Syrians residing in the southern province of Hatay. They will deliver food packages for Syrian families who will fast for 30 days. The campaign aims to distribute aid packages throughout the month to 10,000 families. Aid packages will include food for sahur and iftar, two meals eaten before the start of daily fast and after its end, as well as cleaning materials. Charities will also hand out meal tickets to more than 2,000 Syrian families.

As a preparation for Ramadan, small mosques in tent camps where thousands of Syrians live will undergo maintenance and cleaning work. Muslims in tent camps will attend tarawih prayers, which are held specifically during Ramadan. Various events will be held at tent camps for Syrians including iftar banquets and a Koran recitation contest.

The Presidency of Religious Affairs (Diyanet), Turkey's state-run religious authority, also started a campaign to help Syrians. Diyanet officials in every city and town will determine the number of Syrians in need and coordinate aid efforts to families with local businesspeople.

The campaign will include accommodation of homeless Syrians in big cities and delivery of food and humanitarian aid to families. In 22 camps near the border with Syria, Turkey hosts some 218,000 Syrian citizens while the remaining 831,368 people displaced by the civil war stay elsewhere across the country. with access to sufficient food, medical care and education, others live in squalid conditions at makeshift.
Last Update: Jun 30, 2014 2:52 pm
RELATED TOPICS