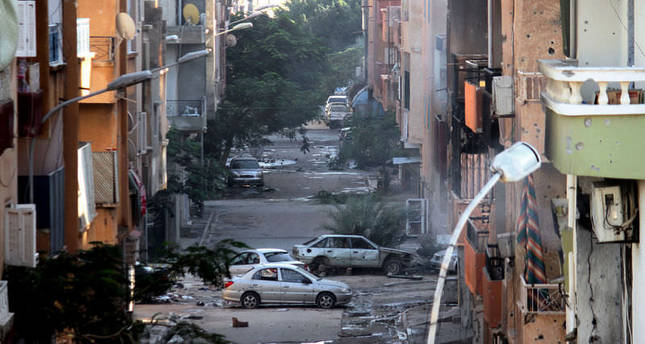 by Yusuf Selman İnanç Nov 04, 2014 12:00 am
Libya is on the brink of collapsing into a failed state as the security situation continues to deteriorate due to ongoing deadly clashes between rival militias that threaten to tear the country apart. In the vacuum of Libya's political chaos, major armed militia groups have tried to seize control of vast areas. The two main armed militias, Zintanis and Misratans, have been fighting to seize control of key installations, including the international airport. The airport in Benghazi, which is controlled by Zintani brigades, is of crucial importance because it enables militia groups to easily access the center of Tripoli, which means greater control over the capital city. Libya has suffered from a chronic absence of security with various actors emerging. The powerlessness of the central government has led many people to take up arms against the government. State security forces have also failed to protect the government, leaving the country unprotected and open to heavy clashes between rival militias trying to gain authority over the government and the country. Peace and political stability is no closer to being achieved as no rival militia has been strong enough to put an end to the ongoing war. Among the major militia groups, Ansar al-Sharia is a Salafist militia, formed by Mohamed al-Zahawi, who fought in Afghanistan, emerged in June 2012. They demanded the establishment of a state ruled by Sharia in the eastern city of Benghazi. They have been fighting with Libyan army brigades and forces loyal to Haftar for months. The Libyan National Army, led by General Haftar, which rejects the authority of the central government, is seen as a major force against some militias. After long fading from the political scene, Haftar came back as a powerful nemesis of the incumbent government, which accuses Haftar of attempting a coup to overthrow the government. The militias loyal to him started an offensive against Ansar al-Sharia in Benghazi to gain control of the eastern city. The central government, in a state of continued turmoil, has long been at the mercy of militias that hope to integrate and build a national army against the interim government. After Moammar Gadhafi's ouster, the army has disintegrated, and the central government has gradually lost its power without having much effect on the ongoing violent clashes between armed forces loyal to Haftar and militia groups that serve as part of Libya's regular army in the eastern city of Benghazi. As many militant groups have taken up arms against the fragile central government, the government has decided to hold an early election in June to replace the interim government through democratic methods. However, the problem is that there are no-well established political groups to play a role in holding democratic elections amid the rising unrest.

Amid the ongoing clashes, the groups have been committing war crimes and violating human rights, a recently released report by Amnesty International revealed. The report, named as, "Rule of the gun: Abductions, torture and other abuses by militias in western Libya" provides evidence that armed groups have possibly summarily killed, tortured or ill-treated detainees in their custody and are targeting civilians based on their origins or perceived political allegiances. "In today's Libya, the rule of the gun has taken hold. Armed groups and militias are running amok, launching indiscriminate attacks in civilian areas and committing widespread abuses, including war crimes, with complete impunity," said Hassiba Hadj Sahraoui, Deputy Director for the Middle East and North Africa Program. "Indiscriminate attacks and targeting medical facilities are prohibited under international law and can constitute war crimes. Yet, fighters on all sides in this conflict have fired GRAD rockets and artillery in crowded civilian neighborhoods. " he added. Scores of civilians have been abducted by armed groups in Tripoli, Zawiya, Warshafana and towns in the Nafusa Mountains and held hostage for up to two months in a spate of tit for tat attacks, based on their town of origin or perceived political affiliations. In some cases, civilians have been abducted as bargaining chips, in order to secure prisoner exchanges. While several such exchanges have taken place since the start of the conflict on 13 July, abductions and other reprisals have continued.

Tripoli residents originally from Zintan told Amnesty International that Libya Dawn militias had carried out door-to-door "manhunts" to seize people based on their tribal affiliation or presumed political allegiances. Militias also carried out extensive raids against civilian homes, looting and destroying property and setting homes and farms ablaze in the area of Warshafana.

"What is happening in Libya at the moment goes far beyond human rights violations. It is a quest for revenge. People have stopped being human," said a media worker on attacks against the media. The report warns that the war in Libya has been based on tribal differences rather than on the political issues. Therefore, people in the streets have been abducted or killed simply because of their origins. Mohamed Saad al-Ghannay, a safety engineer originally from Zintan aged 51, was abducted by a militia on Aug. 5 from a crisis meeting held to decide how to deal with the fire that broke out in Tripoli after fuel depots were hit in clashes around the capital's international airport. He told Amnesty International that two armed men picked him up by the arms, and dragged him out of the meeting after they ascertained that he was of Zintan origin. He was released on the 58th day of his abduction as part of a prisoner exchange between the cities of Misratah and Zintan. Mohamed Saad al-Ghannay told Amnesty International: "I am an ordinary civilian. My only fault is that I am from Zintan."