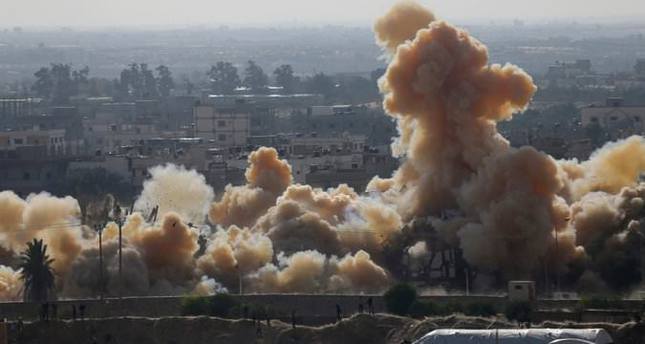 by daily sabah
Nov 06, 2014 12:00 am
Families living near Egypt's border with the Gaza Strip have begun emptying their homes due to clashes between security forces and Ansar Bayt al-Maqdis – an al-Qaida-inspired terror group that has allegedly declared allegiance with the Islamic State of Iraq and al-Sham (ISIS). The group is targeting police forces and soldiers on the Sinai Peninsula, a strategically important area that borders Israel, Gaza and the Suez Canal, the fastest shipping route between Europe and Asia.

Reuters news agency reported that, in the village of Ibshar and eight others along the frontier, 680 houses – home to 1,165 families – are being razed to seal off smugglers' tunnels with hopes it will crush a militant insurgency in the northern Sinai. It is claimed that Ansar Bayt al-Maqdis has launched a beheading campaign against those local residents who inform security forces about their upcoming attacks and the location of their militants.

The Egyptian army has been pounding militants but has avoided launching a ground attack due to geographic difficulties and the fact that the militants cannot be distinguished from common residents. A source from the Egyptian security forces told Reuters, "The army's biggest problem is that the militants are part of the civilian population. You need to pick them out with a pin." Reuters reported that some residents say the new measures amount to collective punishment that will do little to rebuild loyalty to a central government that has long neglected them. "I am not leaving my house even if they kill me. I was born and raised in this house," said one woman sitting outside her home in Ibshar. "If they want the terrorists, they know where they are. There's no need to force us from our homes."

A night-time curfew is in force In northern Sinai but the streets were deserted by mid-afternoon. Internet and phone lines are disconnected for an average of 16 hours a day according to residents and checkpoints dot the main roads. The Bedouin clans that form most of the region's population have long complained of the lack of jobs and opportunities that they say drives many locals into the tunnel smuggling trade.

Since Israel does not allow the import of goods into Gaza through legal means, the residents on the Sinai Peninsula and in the Gaza Strip make trade through the use of tunnels. While Egypt has destroyed most of the larger tunnels, which were once used to smuggle cars and trucks, hundreds of smaller tunnels have evaded detection and their owners say they engaged in lucrative business transactions during Israel's 50-day war in Gaza over the summer. Last month's attack prompted Egyptian authorities to redouble their efforts to find and shut the tunnels. However, these efforts have deteriorated the economic situation of the local people, who are increasingly troubled by poverty due to the lack of job opportunities and investment.

Egypt has offered compensation to residents who leave their homes, handing out $125 to cover three months of temporary accommodation. More than 200 houses were bulldozed or demolished in the plan's first few days – revealing no less than 117 passages, an officer told Reuters. However, the residents seem quite disappointed with the central government's policy toward the region.