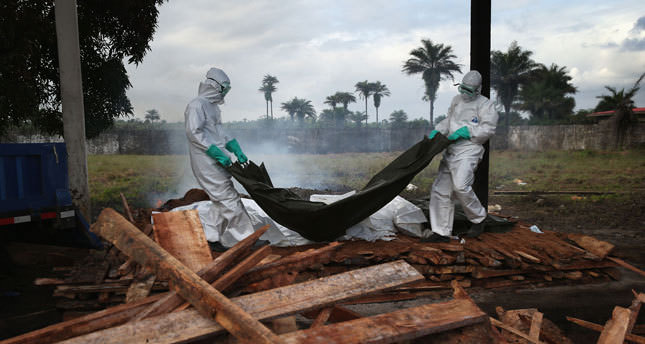 by AA
Nov 06, 2014 12:00 am
Money-minded pharmaceutical companies did not produce Ebola vaccines until a profit was certain, an expert said on Tuesday. Ebola has killed at least 4,877 people since the beginning of February this year. Poor countries like Liberia, Sierra Leone and Guinea have been the hardest hit with the more than 1,012 confirmed cases to date. However, according to the World Health Organization (WHO), the deadly virus has killed people in Africa since 1979, raising questions as to why clinicians have no vaccines and no cure despite years of research. "A profit-driven industry does not invest in products for markets that cannot pay," said Margaret Chan, director general of WHO in a speech on October 13. "The outbreak highlights the dangers of the world's growing social and economic inequalities," Chan said. "The rich get the best care while the poor are left to die."

Because vaccine development requires substantial investment for research and development, pharmaceutical companies only invest in a vaccine if they can gain revenue from the innovation, according to Annika Hedberg, senior policy analyst at the European Policy Center. Hundreds of Ebola cases have been reported in poor African countries such as the Democratic Republic of Congo with 318 Ebola cases in 1976 and 425 cases in Uganda in 2000, according to WHO. West Africa could suffer from 5,000 to 10,000 new cases of Ebola every week by the end of November as well, WHO reported in October.

On October 22, U.S. drug maker Johnson & Johnson announced in a press release that it would accelerate and expand the production of an Ebola vaccine program. "Our goal to produce more than a million doses of the vaccine in the next few months is within reach," Paul Stoffels, chairman of Johnson & Johnson, said in the press release. Mohga M. Kamal-Yanni, senior health and HIV policy advisor at Oxfam, told Anadolu Agency (AA) that pharmaceutical companies are solely accountable to their shareholders. "[Pharmaceutical companies] provide services so they can produce high returns for shareholders," Kamal-Yanni said. Allowing the market to decide what medicines and vaccines should be invested in – in the same way as other products such as make-up and cars – raises ethical problems, Kamal-Yanni said. "If I lived without a car, I could go by taxi, but I couldn't survive without medicine; there is a huge difference," she said.

There would not be a need for a massive vaccination campaign and Ebola cases would have been limited from the start if a vaccine had been developed earlier, Kamal-Yanni said. The decades-long delay in investing in an Ebola vaccine could cost the international community billions of dollars to battle the deadly virus. On October 24, EU leaders pledged to spend more than 1 billion euros to control the epidemic. On Octoer 27, the EU's newly appointed Ebola coordinator, Christos Stylianides, said that the international community had "underestimated" the danger and extent of the threat of Ebola, which threatens nations beyond Africa, and that the speed to fight it must be accelerated.