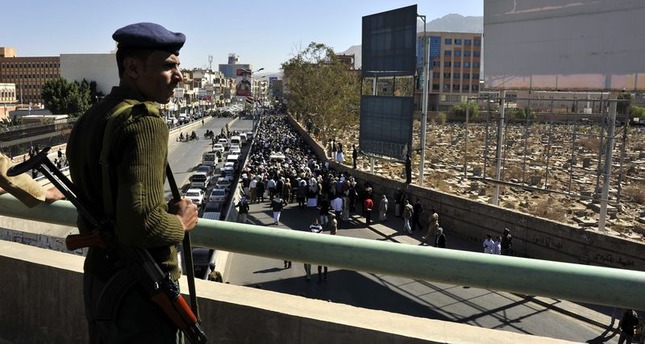 by Nov 07, 2014 12:00 am
Yemeni security forces have killed a senior Al-Qaeda operative in the southern province of Lahij, where he was known as the group's local chief, state media said Friday.

He was killed as he resisted arrest and one of his companions was wounded and detained, the official said.

Assiri "was an Al-Qaeda leader and its emir in Lahij," the official added.

Al-Qaeda in the Arabian Peninsula, which operates in Yemen, is classified by the United States as the network's deadliest franchise.

Last month Washington slapped $45 million in rewards on the heads of AQAP leaders in Yemen.

AQAP was born out of a 2009 merger of its franchises in Al-Qaeda founder Osama bin Laden's native Saudi Arabia and his ancestral homeland in Yemen.

The group has exploited instability in the impoverished country since a 2011 uprising overthrew president Ali Abdullah Saleh.

Yemen has joined forces with the United States to target the jihadist network, and the group has come under repeated deadly strikes by drones.

On Wednesday, AQAP announced the death of two top commanders, Shawki al-Baadani and Nabil al-Dahab, in drone raids on Monday.

Tribal sources had said at least 20 militants were killed in those strikes.

The United States is the only country operating drones over Yemen, but U.S. officials rarely confirm individual strikes.