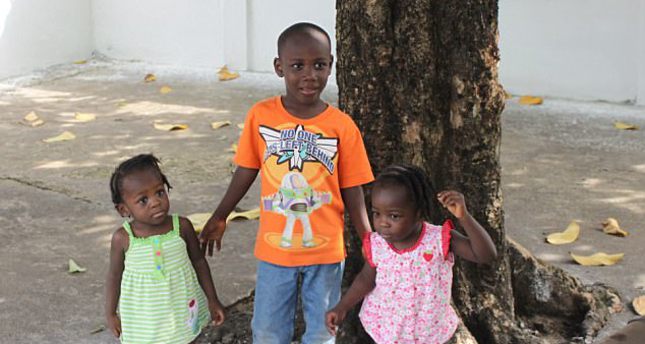 by AA Nov 22, 2014 12:00 am
The Kromah family lives in Brewerville, about a three-hour drive from Liberia's capital, Monrovia. The family has lost 11 members to the deadly Ebola virus, including its breadwinners, leaving behind 26 children of various ages and a four-month-old baby. Every day, the children, now dependent on their uncle, Abraham Kromah, who himself lacks any source of income, wake up not knowing how they will make ends meet. "I am not working now," Kromah, a former driver who recently broke his legs in an accident, told The Anadolu Agency. "I am sitting at home; I don't have any job." Kromah has lost 11 relatives to Ebola, including his oldest brother, Lassanna; one of his three wives; his brother, Laimini; two of Laimini's four wives; his brother, Sonnie; and Sonnie's oldest daughter. "We never knew how dangerous the virus was," he lamented.

In recent months, Ebola – a contagious disease for which there is no known treatment or cure – has killed roughly 5,420 people, mostly in West Africa, according to the World Health Organization. At least 2,964 of these have been registered in Liberia alone. Since the beginning of October, however, the country has seen a reduction in the number of new Ebola cases.

Kromah, meanwhile, has suddenly found himself responsible for 26 children and a baby. "I can't do anything for my brothers' children because of my own condition," he said, struggling to hold back his tears. The Kromah family home is dilapidated, lacking the most basic amenities, including a roof, according to an AA reporter who visited it. Kromah and the children now survive on handouts from well-wishers in the community and Orphans Concern Liberia, a local NGO. "Since our people died, some people have been helping us with food," he told AA. "We have received 20 bags of rice, but we sell one of the bags to allow us to get soup." Kromah said the biggest challenge for him and his late brother's wife, Bindu, was taking care of four-month-old Jusufu, who was still being breastfed when his mother succumbed to the virus at the Elwa Ebola Center. "At night he cried so much from hunger and wanting his mother's breast, but I could not help since I have no milk in my breast to give him," Bindu told AA. This situation, she added, had continued for two days until a group of local women got some money together for Bindu to buy a few cups of milk for the baby. "There are days we hardly have money to purchase milk for this child," Bindu lamented. "So I had to feed him with water." Asked whether the struggling family was receiving any support from the Ministry of Health and Social Welfare, she responded in the negative. "Nobody has come from the government to help," Bindu told AA, adding that they were only being assisted by Orphans Concern Liberia head Amos Sawboh. "It's only this young man, Amos; even the food this child is eating now, he [Amos] provided it," she said with tears in her eyes.

The NGO moves from one community to another, identifying children who lost their parents to Ebola, providing them with food and cash. The group has been able to reach over one hundred children in Monrovia and its environs. UNICEF Liberia Child Protection has joined up with Liberia's Ministry of Health and Social Welfare to help over 200 children that have been orphaned since the Ebola outbreak began earlier this year. "Now, almost all orphanages are in Monrovia. So we're training 60 social health workers to work directly with affected children within communities, since they can't all fit in the orphanages," UNICEF Child Protection Director Maitta Clark told AA.

UNICEF Liberia predicts that the number of children orphaned by Ebola – which currently stands at nearly 200 – will eventually reach as many as 2,000. UNICEF and the Health and Social Welfare Ministry are working with heads of orphanages to assess the standards of care for children. They are also working jointly on foster parents' care, by which a child can be adopted by a capable couple or person. However, it remains unclear when the plan will be implemented and where exactly the orphans will be accommodated.