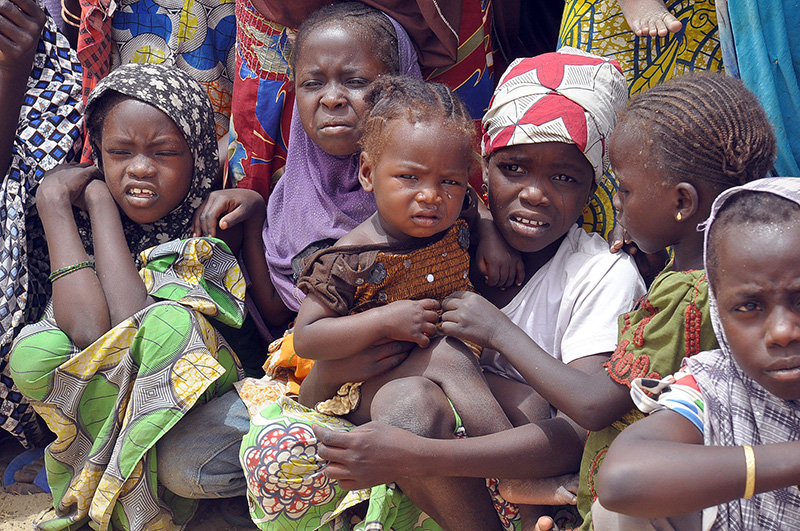 Children fleeing from Boko Haram attacks gather at a refugee camp in Niger Republic on March 13, 2015 | Photo: AFP
by Daily Sabah with Reuters Mar 25, 2015 12:00 am
Boko Haram militants have kidnapped more than 500 women and children from the northeastern town of Damasak in Nigeria, recently retaken by multinational forces, Reuters reported.

There was no immediate official confirmation of the figure. Some agencies estimated the number of abducted women and children, who were taken on Tuesday, to be around 350 while some reported it as more than 500.

"They took 506 young women and children [in Damasak]. They killed about 50 of them before leaving," a trader called Souleymane Ali told Reuters in the town. "We don't know if they killed others after leaving, but they took the rest with them."

Troops from Niger and Chad last week found the bodies of at least 70 people in an apparent execution site under a bridge leading out of Damasak, where the streets remain strewn with debris and burnt-out cars after the fighting.

Ali said his wife and three of his daughters were among those seized.

"Two of them were supposed to get married this year. [Boko Haram] said 'They are slaves so we're taking them because they belong to us'," he said.

Mohamed Ousmane, another trader, said the militants took his two wives and three of their children.

A 40-year-old resident who gave her name as Fana said fighters had rounded up captives in the main mosque before taking them out of town. She said she had saved her two children by hiding them in her house.

Boko Haram wants to carve out a caliphate in northern Nigeria. A sharp increase in violence forced a delay in planned elections last month in Africa's most populous country.

Ali said he was just hoping life would return to normal.

"We've seen the worst possible things you can imagine, so after a certain point there was no point in trying to leave," he said. "They killed all our friends, our family members, so we just submitted ourselves to God."
Last Update: Mar 25, 2015 4:04 pm
RELATED TOPICS