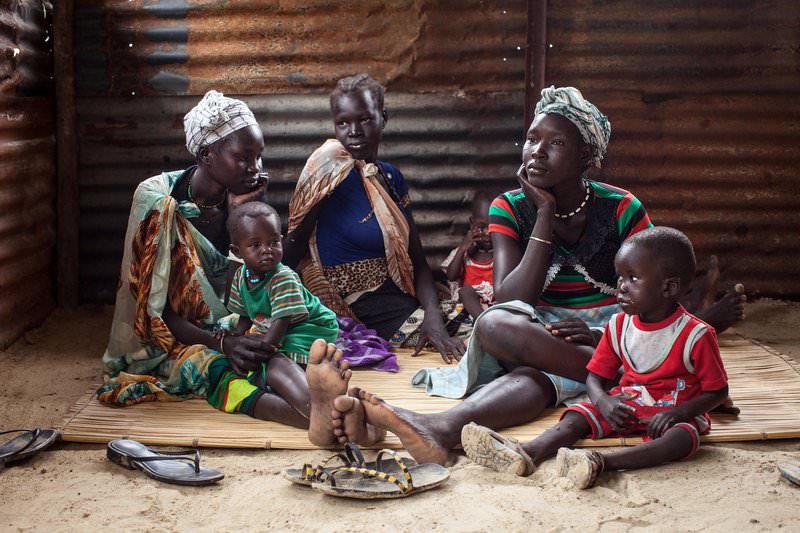 A file photo taken on July 7, 2014 shows families with malnourished children waiting to receive treatment at the Leer Hospital, South Sudan (AFP Photo)
by Daily Sabah with Reuters May 12, 2015 12:00 am
More than 300,000 people are cut off from life-saving aid in South Sudan's oil-producing Unity State after heavy fighting forced aid agencies to withdraw, a UN human right official in Geneva said on Tuesday.

The world's newest state, which declared independence from Sudan in 2011, was plunged into conflict nearly 18 months ago between forces loyal to President Salva Kiir and rebels allied with his former deputy, Riek Machar.

Rupert Colville, a spokesman for the U.N. High Commissioner for Human Rights in Geneva, said it appeared that the perpetrators of the attacks were soldiers with the South Sudan Army (SPLA) and mobilised youths "clad in civilian clothes, wielding AK-47s".

"Whenever fighting intensifies between government and opposition forces, the civilian population bears the brunt," he told a news conference. He did not have figures for how many people had been killed.

The United Nations, along with Doctors Without Borders, has withdrawn its staff from Unity state.

The timing of the attacks is especially alarming because they come as farmers are planting crops, Colville said.

South Sudan's government said on Tuesday that rebels were behind a flare-up in fighting and accused them of planning more attacks in Unity and Upper Nile states, the major oil-producing areas.

"All the fighting in Upper Nile is around the oil areas," South Sudan's military spokesperson, Philip Aguer, told Reuters, adding that rebels had targeted Unity's oil hub Bentiu. "Their intention is to control the oil fields in the areas."

He also cast doubt on the number of displaced people.
"Fighting has not reached the area of Leer, and I don't think the populations should run," he said, because civilians were not being targeted.

The UN also estimates that 13,000 children are associated with armed forces and groups nationwide in South Sudan, with credible evidence indicating that both of the warring parties have engaged in the recruitment of child soldiers since the current conflict began in December 2013.
Last Update: May 12, 2015 5:57 pm
RELATED TOPICS