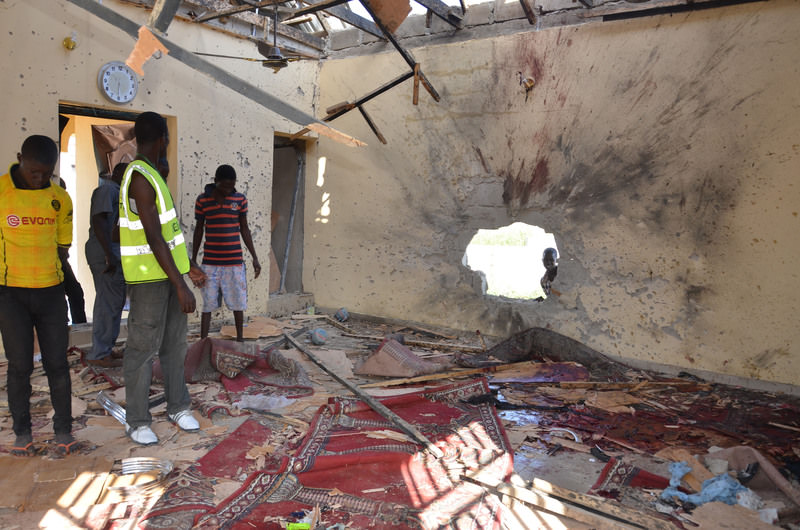 People inspect a damaged mosque following an explosion in Maiduguri, Nigeria, Friday, Oct. 23, 2015. (AP Photo)
by French Press Agency - AFP Oct 23, 2015 12:00 am
At least 27 people were killed,and 96 were injured in a bomb blast at a newly-inaugurated mosque in Yola, northeast Nigeria, on Friday, the National Emergency Management Agency (NEMA) said.

The explosion happened at about 2:00 pm (1300 GMT) at the Jambutu Juma'at mosque in the Jimeta area of the city, shortly after the imam had finished his inaugural sermon.

The blast came after at least 28 people were killed in a suicide bombing at a mosque in Maiduguri, the capital of Borno state, shortly after 5:00 am on Friday.

It was not immediately clear whether the Yola attack was also a suicide bombing or caused by an explosive device hidden in the building.

One volunteer at the Jambutu Juma'at mosque, who helped in the rescue effort but asked not to be identified, said: "This mosque was nearly built and this was the first prayers in it.

"While worshippers had risen for the prayers to start after the sermon by the imam, there was a huge blast in the premises," he said.

"There was confusion and dozens of worshippers lay on the ground in blood."

Another rescuer, who also requested anonymity, said: "The explosion happened in the midst of a large congregation of worshippers."

NEMA's Bello said the victims were taken to two hospitals in the city.

"At the (Adamawa) State Specialist Hospital we have 18 dead bodies and 50 injured. At the Federal Medical Centre, we have nine dead and 46 injured," he said.

"Most of the injured are now in a stable condition and have been moved to the wards. Only a few remain in the emergency section."
He added: "The injuries include fractures, burns and fissures (cuts)."

Yola has been seen as a relatively safe haven from the Boko Haram insurgency, which has ravaged the northeast for the last six years.

Tens of thousands of people fled to the city last year, as the heavily armed Iextremists overran towns and villages across the region.

But fears were heightened after an explosive device went off at a camp for displaced people to the south of the city last month, killing seven people and injuring 20 more.

There have also been a number of suicide bomb attacks in the north of the state, close to the border with Borno, which has been worst affected by the violence.
Last Update: Oct 23, 2015 7:59 pm
RELATED TOPICS