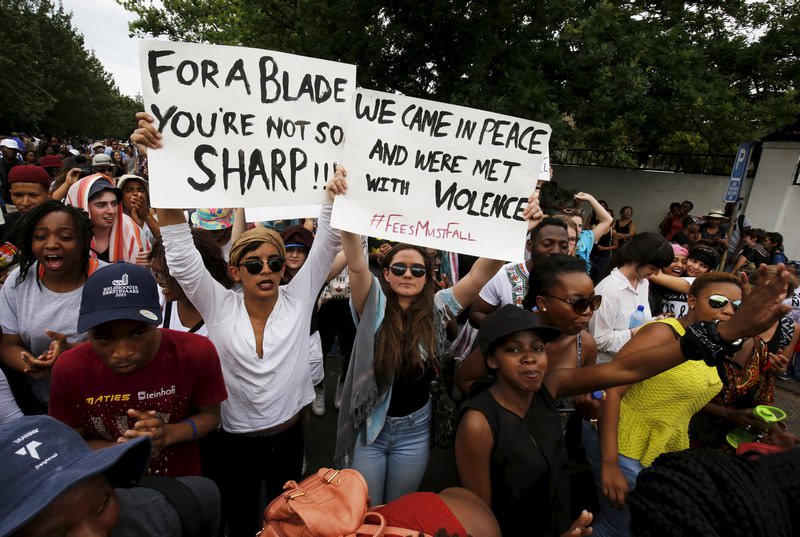 Students protest over planned increases in tuition fees in Stellenbosch, October 23, 2015. (REUTERS Photo)
by Anadolu Agency Oct 23, 2015 12:00 am
Days of protests have forced the hand of South African President Jacob Zuma into declaring that there will be no increase in university fees for the 2016 academic year.

"We agreed that there will be a zero increase of university fees in 2016," Zuma told a media briefing in Pretoria following Friday's protests that saw police firing teargas shells and stun grenades on thousands of protesting students near the seat of government in Pretoria city.

As protesters chanted slogans against a proposal to impose a fee hike, the president met with university managers and student representatives to resolve the issue peacefully.

"Government understands the difficulty faced by students from poor households," Zuma said at the briefing, which was also attended by some of his cabinet ministers.

The protests began last week, when students from universities across the country came out on the streets against the recently proposed 10 to 12 percent hike in tuition fees. Many universities across the country suspended classes this week as a result of the protests, which is believed to be the largest such movement since the end of apartheid 21 years ago.

Zuma also gave assurances to the students that their demands for free tertiary education would also be met in the future. ??It was agreed that vice chancellors will extend the time for examination period to compensate for the time lost," he added.

Earlier on Friday, police fired stun grenades and teargas to disperse thousands of students in the capital Pretoria. The incident took place outside the grounds of the Union buildings.

While most university students remained peaceful as they demanded lower tuition fees, some were also seen burning tires and throwing stones at the anti-riot police.


"We want President Jacob Zuma to stop these increases because some of our parents can't even afford the current tuition fees," Precious Ann, a University of Pretoria student, told Anadolu Agency at the protest.

Remember when they said our generation is lost and lazy? #FeesMustFall #NationalShutDown pic.twitter.com/Zt41cqVn6U

"Where are the promises? What does our freedom really mean to us when the poor can't afford education?" Mary told Anadolu Agency.

Students from several universities in Gauteng provinces, which include Johannesburg and Pretoria cities, participated in Friday's protest.

Some students were also upset that some of their colleagues resorted to violence.

At the protest site, students could be seen demanding that Zuma come out of his office and address them.

On Wednesday, university students clashed with police outside the parliament in Cape Town as they attempted to make their way through the parliamentary gates where the president and members of parliament were seated.

South Africa has several universities in each of its nine provinces. However, some are accused of charging exorbitant university fees.
Last Update: Oct 23, 2015 10:11 pm
RELATED TOPICS