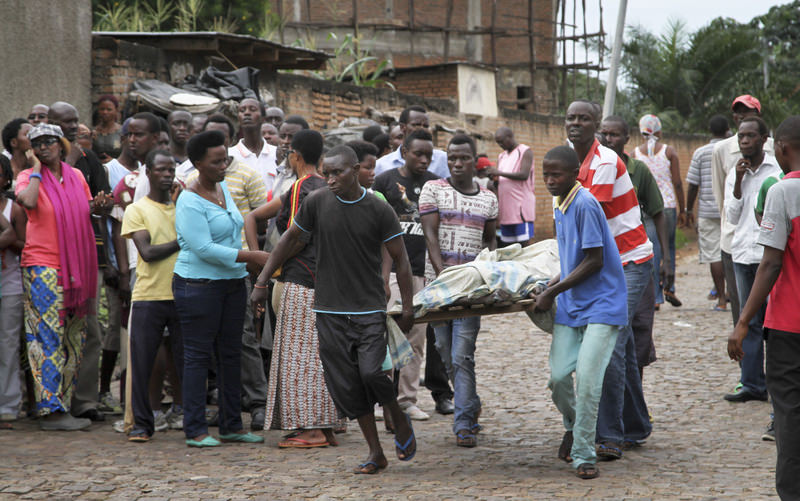 Men carry away a dead body in the Nyakabiga neighborhood of Bujumbura, Burundi, Saturday, Dec. 12, 2015 (AP Photo)
by Associated Press Dec 12, 2015 12:00 am
A Burundian army official in says 87 people were killed in violence Friday when three military installations were attacked by armed men.

Army spokesman Col. Gaspard Baratuza said Saturday eight security officers were among those killed and 21 others wounded in the fighting. Baratuza said forces arrested 45 members of the unidentified group that attacked the military installations.

Burundi's political violence escalated Saturday as 28 people were found shot dead in three neighborhoods in the capital, a day after the government said an unidentified group carried out coordinated attacks on three military installations.

A climate of fear has engulfed the capital, Bujumbura, after the sound of battle could be heard throughout the day Friday and sporadic gunfire overnight. Residents hid in their houses leaving only security personnel patrolling the streets.

Some residents ventured out of their houses Saturday but largely remained uneasily in their neighborhoods.

An eyewitness told The Associated Press he counted 21 bodies with bullet wounds in their heads in the Nyakabiga neighborhood Saturday morning. Some of the dead had their hands tied behind their backs, said the witness, who insisted on anonymity due to safety concerns.

It could not be independently verified who killed the 21 but another witness blamed government security forces saying they went after the victims in door-to-door searches.

"I fear I can be killed like my friend yesterday, police came to search our house and by chance I escaped. If I had money, I would go buy a passport and flee," said Fidele Muyobera,22, who works as household help.

"What is the international community waiting for? Will they intervene when there are no more people in Burundi?" asked businessman Gerald Bigirimana in Nyakabiga while pointing at one of the bodies lying on the streets.

The body of a 14-year-old boy was found in the Jabe neighborhood, the witness said. James Ntunzwenimana was shot dead while going to buy sugar, the witness said who spoke on condition of anonymity because he feared for his safety.

Six more bodies were found in Musaga, where the military said their installation was attacked, though residents said more bodies had been taken away by security forces.

Three soldiers were killed in the pre-dawn raid Friday by an unidentified group in the Ngagara, Musaga and Mujejuru areas, said two soldiers who insisted on anonymity for fear of reprisals. The army killed 12 of the attackers and 20 others were arrested, including one who was wounded and is being treated at a military hospital, army spokesman Col. Gaspard Baratuza told state radio.

The United States said it is "deeply alarmed" by the violence in Bujumbura, said a statement released by John Kirby, a State Department spokesman. The U.S. called on neighboring countries to start urgent negotiations between Burundi's government and the opposition to defuse the situation.

The U.N. Security Council late Friday strongly condemned the violence, and U.S. Ambassador Samantha Power said the council should look at "how the international community can protect civilians from mass violence, including for the possible deployment of a regionally led peace support operation."

The violence is linked to President Pierre Nkurunziza's third term in office, which many Burundians and foreign observers had opposed as unconstitutional and in violation of a peace accord. The treaty ended a civil war in which 300,000 people were killed between 1993 and 2006.

At least 240 people have been killed since April and about 215,000 others have fled to neighboring countries, according to the United Nations. Several hundred people have also been imprisoned for opposing Nkurunziza's re-election in July this year.
Last Update: Dec 12, 2015 6:08 pm
RELATED TOPICS