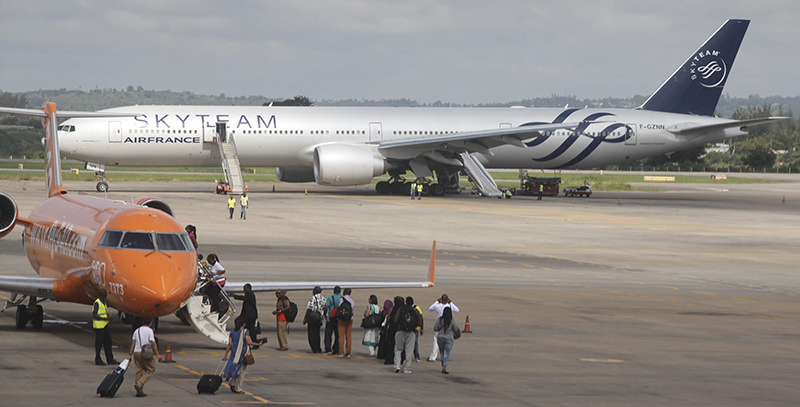 The Boeing 777 Air France flight 463 parked at Moi International Airport in Kenyan coastal city Mombasa, 20 December 2015 (EPA Photo)
by Associated Press Dec 21, 2015 12:00 am
A fake explosive rigged with cardboard, sheets of paper and a household timer forced an Air France flight into an emergency landing in Kenya on Sunday, sending hundreds of passengers down emergency slides in what the airline's CEO said was the fourth bomb hoax against the airline in recent weeks.

The homemade apparatus was discovered around midnight hidden in a lavatory cabinet behind a mirror where it was apparently placed during the approximately 11-hour flight to Paris from the island of Mauritius, said the airline's CEO, Frederic Gagey. He said the airline has had heightened security checks around the world since the Nov. 13 attacks that left 130 people dead in Paris.

"It was an ensemble of cardboard, papers and something that resembled a kitchen timer. Nothing that presented a danger to the plane, to the passengers or to the crew," a visibly irritated Gagey told a news conference in Paris. He said it contained no explosives.

With France in a state of emergency since the Paris attacks and the United States on high alert since the attack in San Bernardino, California, that left 14 dead, hoaxes present a particular conundrum for security officials, who must choose between feeding mass fear and keeping the public in potential danger. On Tuesday, the two biggest school systems in the U.S. New York City and Los Angeles received threats of a large-scale terrorist attack. LA reacted by shutting down the entire district, while New York dismissed the warning as an amateurish hoax and held classes.

Air France has been the target of three prior hoaxes, all in the United States, Gagey said. The fourth came on board the flight from Mauritius, a popular winter vacation spot for French tourists.

The Boeing 777 was heading to Charles de Gaulle airport in Paris when its pilots requested an emergency landing early Sunday at Kenya's coastal city of Mombasa.

Gagey congratulated the crew for their cool-headed reaction to divert the plane to Moi International Airport. A safety check was carried out in the bathroom before the flight, he said, indicating the device was placed in the cabinet while the plane was in the air. He denied any security failure in the flight, saying that passengers are checked and sometimes double-checked on flights.

Six passengers were being questioned, including the person who informed the crew about the device, said a Kenyan police official who is part of the investigation and who insisted on anonymity because he is not authorized to speak to the press.

Passengers praised the cool-headed response of the flight crew.

The plane carrying 459 passengers and 14 crew members had left Mauritius at 9 p.m., said Kenyan police spokesman Charles Owino. All passengers were safely evacuated and the device was removed, he said. The passengers were being flown to Paris on a special flight late Sunday.

Two Air France flights from the U.S. to Paris were diverted on Nov. 17 after bomb threats were received. No bombs were found on the planes from Los Angeles and Washington. Air France officials said the third hoax was on a Dec. 8 flight from San Francisco to Paris. It was not immediately clear what, if any, action was taken in response to that threat.

Gagey decried the series of hoaxes.

"This is behavior that for me is criminal. It sows doubt, it disrupts our operations, it inconveniences passengers, and obviously each time we can get information about those who are responsible for these extremely bad jokes, pardon the expression, we file a legal complaint," Gagey said. "We find this behavior stupid, damaging and unacceptable."

The Daesh group has claimed responsibility for the Paris attacks and the Oct. 31 downing of a Russian passenger jet in Egypt's Sinai desert that killed all 224 people aboard. Moscow says the plane was brought down by a bomb planted on board. Daesh has also repeatedly threatened the symbols of France among which Air France is prominent.

Steven Ciaran, a 30-year-old Irishman, said he was seated at the back of the Air France jetliner watching a movie when he noticed the rushed movement of cabin crew preparing emergency drills. The crew told him it was a technical problem and they created a calm environment among the passengers, he said.

"I was very distressed because I could see we were far from the destination," said Ciaran, who was traveling from Reunion Island to Dublin for the Christmas holiday. He said passengers reassured each other.

"I thought the plane had difficulty and not that it had anything to do with terrorism," he said.
Last Update: Dec 21, 2015 8:33 am
RELATED TOPICS