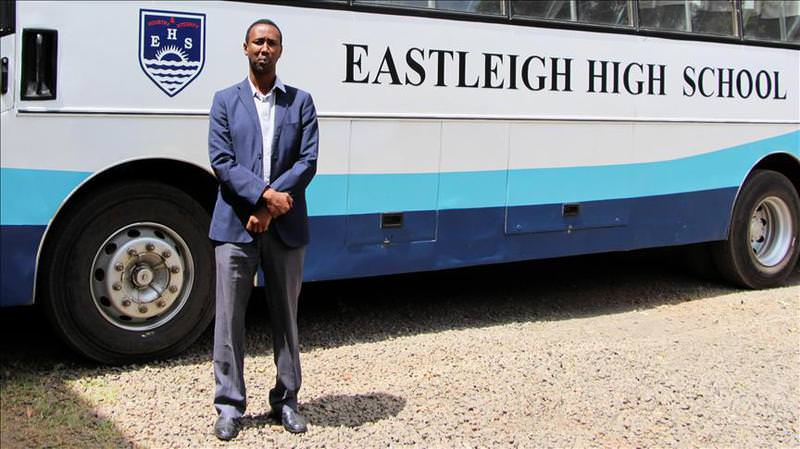 by Anadolu Agency Mar 03, 2016 12:00 am
A Kenyan Muslim teacher is among 10 finalists nominated for this year's U.S. Global Teachers Prize. Ayub Mohammed stands a chance of walking away with 100 million Kenyan shillings ($1 million) for educating youths against violent extremism and radicalization.

The Islamic studies teacher from Eastleigh High School in Nairobi was selected from among 8,000 applicants from 148 countries. Nairobi's Eastleigh suburb has been labeled by authorities in Kenya as the main recruiting ground of youth into the extremist al-Shabab group.

Eastleigh is predominantly inhabited by Somali immigrants; in 2014 more than 4,000 youths were arrested in one week during an anti-terror swoop. Anadolu Agency traveled into the heart of Eastleigh Suburb - dubbed "Little Mogadishu" by locals - to meet Ayub Mohammed. "I hail from Wajir in northern Kenya, one of the most underdeveloped places in Kenya, so I decided to teach to become a role model to my community," he told Anadolu Agency. "Violent extremism and radicalization is a very big problem here in Kenya; the youth are easily coerced into joining militant groups," Ayub said.

"As a teacher I realized that I should be part of the solution but this time in the school where I try to use the classroom as a safe space, I have been trying to engage these students, bringing about a mindset change. I teach these students about the ideologies and propaganda used by these violent extremist groups," Ayub added.

Over the years students who have graduated from Mohammed's class have gone into the community and become peace champions, spreading further what they learnt from their teacher at Eastleigh High.

Unemployment has been one of the main reasons that reformed youth in Kenya have given as the reason they joined al-Shabaab; Mohammed, who is also a business teacher, has set up a project that offers jobs. "There is a challenge of solid-waste pollution and unemployment in Nairobi. Just like radicalization and violent extremism, I have turned my students into the solution. I came up with a roofing tile project where students recycle plastics and turn them into tiles, in that way dealing with the problem of housing and also unemployment."

If Ayub Mohammed wins the $1 million prize he says that he will "set up a scholarship that will cater for needy students in the community. They will be able to go to college, go to school and then give back to society, I also intend to promote teacher mentorship especially in northern Kenya." The winner will be announced in an evening ceremony on March 13 in Dubai.
Last Update: Mar 03, 2016 2:44 pm
RELATED TOPICS