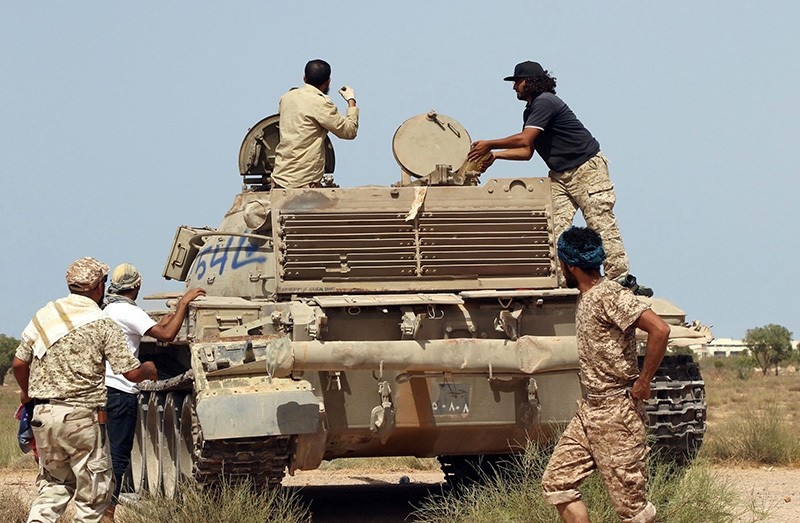 Forces loyal tou00a0Libya's Government of National Unity (GNA) are seen around a tank on July 2, 2016 as they take position to hit Daesh targets in Sirte. (AFP Photo)
by Jul 07, 2016 12:00 am
At least 12 Libyan soldiers are dead after a car bombing in the volatile eastern city of Benghazi, a Libyan military official said on Thursday.

Thirty-five others were injured in the bombing, he added. No one has claimed responsibility for the attack.

However, Al Wasat blamed the assault on the Daesh extremist militia.

In recent months, forces loyal to the Libyan government based in the eastern city of Tobruk have stepped up a military campaign against militant insurgents in Benghazi.

Libya has been in turmoil since the country's 2011 revolution, which toppled long-time dictator Moamer Gaddafi.

Daesh forces have taken advantage of the chaos to establish a foothold in the oil-rich country.

In March, a UN-backed unity government arrived in the Libyan capital, Tripoli, amid international hopes it would be able to re-establish stability and stop Daesh's expansion in the country.

However, Tobruk's powerful military chief, Khalifa Haftar, and a supportive parliament based in the city are still holding out against the nascent unity government.
Last Update: Jul 07, 2016 12:24 pm
RELATED TOPICS