At least 90 protesters killed in Ethiopia over land disputes 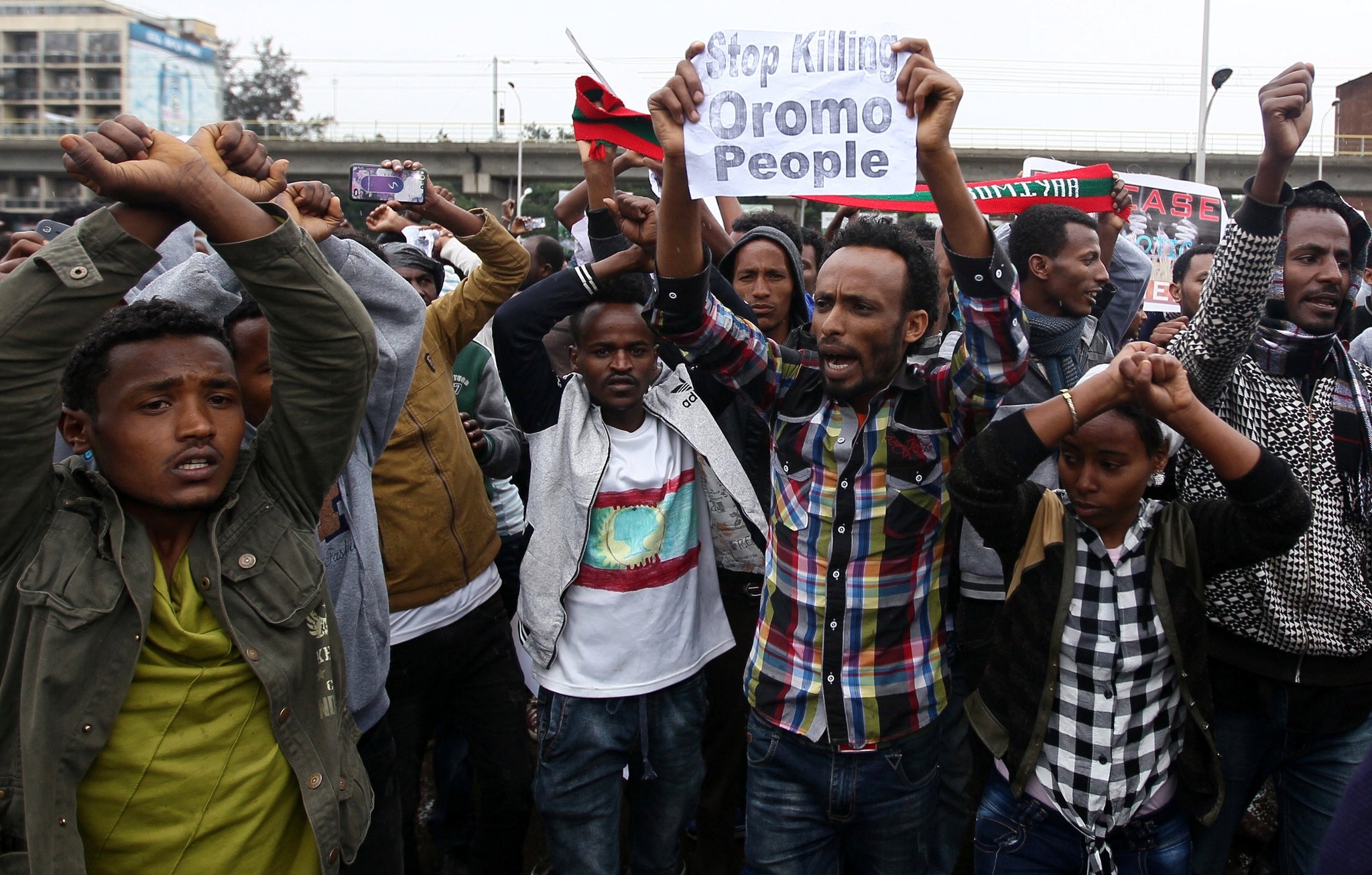 Protesters chant slogans during a demonstration over what they say is unfair distribution of wealth in the country at Meskel Square in Ethiopia's capital Addis Ababa, August 6, 2016. (REUTERS Photo)
by reuters
Aug 08, 2016 12:00 am

More than 90 people were shot dead by security forces in protests across Ethiopia's Oromiya and Amhara regions at the weekend, residents and opposition officials said on Monday.

Unrest flared in Oromiya for several months until early this year over plans to allocate farmland surrounding the regional capital for development. Authorities scrapped the scheme in January, but protests flared again over the continued detention of opposition demonstrators.

At the weekend, protesters chanted anti-government slogans and waved dissident flags. Some demanded the release of jailed opposition politicians.

"So far, we have compiled a list of 33 protesters killed by armed security forces that included police and soldiers but I am very sure the list will grow," Mulatu Gemechu, deputy chairman of the opposition Oromo Federalist Congress, said.

The deaths were in at least 10 towns across Oromiya, he said, including Ambo, Dembi Dolo and Nekemt - areas that saw previous rounds of protest.

"Twenty-six people have been injured, while several have been detained," Mulatu said, adding three members of his party were also being held.

Government officials were not immediately available for comment. The state-owned Ethiopian News Agency said "illegal protests" by "anti-peace forces" had been brought under control. It did not mention casualties.

Oromiya is the second region to be hit by unrest in the past few days.

In Amhara, residents said police fired live bullets at demonstrators during protests over disputed territory that continued until early Monday in the city of Bahir Dar.

"Soldiers fired live rounds at protesters. Hospitals have been filled by dead and wounded victims," one resident said, putting the number killed at 60.

Tensions have been rumbling for two decades over the status of Wolkayt district, a stretch of land that protesters from Amhara say was illegally incorporated into the neighbouring Tigray region to the north.

Amnesty International said the bloodshed in Bahir Dar may amount to "extrajudicial killings" and that at least 30 people were killed in one day.

The United States said it was "deeply concerned" by the violence in both regions.

"We reaffirm our call to respect the constitutionally enshrined rights of all citizens, including those with opposition views, to gather peacefully and to express their opinions," its embassy in Addis Ababa said in a statement.

Any sign of unrest is closely watched in Ethiopia, a Western ally against militants in neighbouring Somalia and an economic power seen as a centre of relative stability in a fragile region.