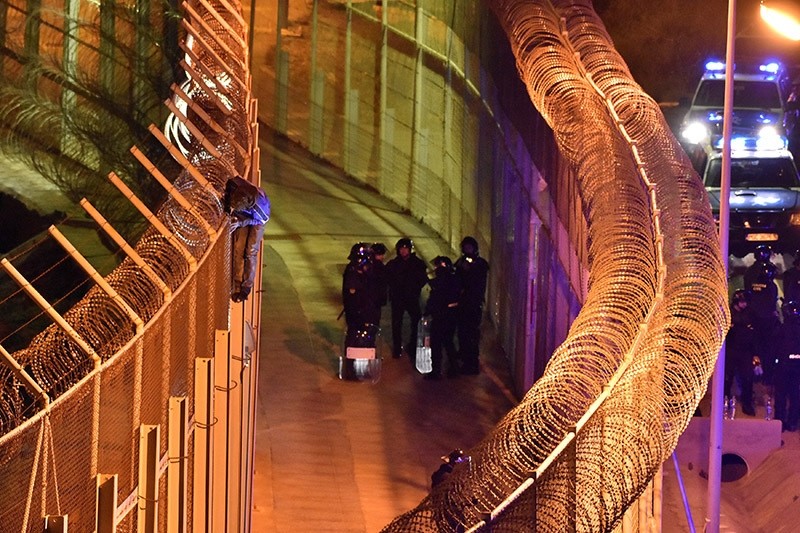 An African migrant stands on top of a border fence as Spanish police stand guard below during a failed attempt to cross into Spanish territories in Ceuta, January 1, 2017. (Reuters Photo)
by Associated Press
Jan 01, 2017 12:00 am

A regional government spokesman told The Associated Press that 50 Moroccan and five Spanish border guards were injured early on Sunday when the large group of migrants tried to enter Spain.

The spokesman said two migrants managed to reach Spanish soil. Both were injured in scaling the six-meter (20-foot) -high border fence and were taken to a hospital by Spanish police. He spoke anonymously in line with government policy.

A further 100 migrants climbed the fence, but Spanish agents sent them directly back to Morocco.

Last month, more than 400 migrants succeeded in breaching Ceuta's fence in one of the biggest crossing attempts of recent years.

Hundreds of sub-Saharan African migrants living illegally in Morocco try to enter Ceuta and Melilla, Spain's other North African enclave, each year in hope of getting to Europe.

Most migrants who try to cross are intercepted on the spot and returned to Morocco. Those that make it over the fences are eventually repatriated or let go.

Thousands more try to reach Europe by crossing the Mediterranean Sea, often in small craft unfit for the open sea.