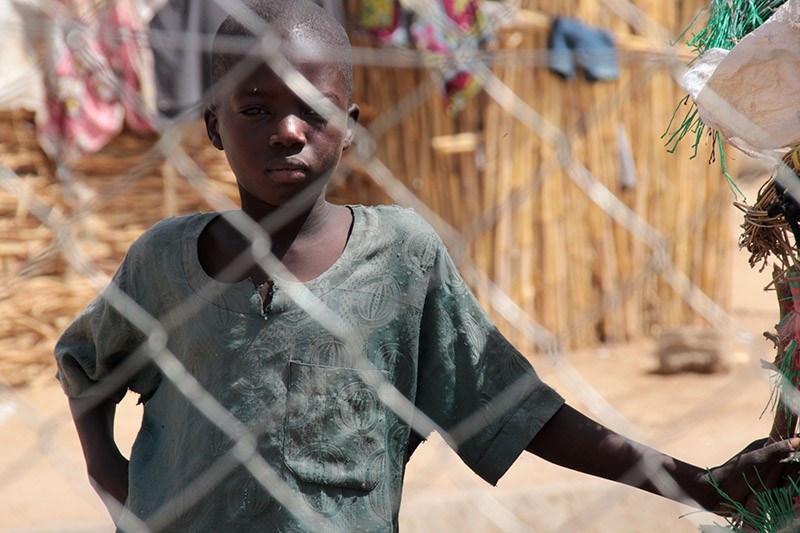 A handout photo released by the World Food Programme (WFP) shows a boy at the Pompomari camp in Damaturu on January 26, 2017 during a visit by the WFP executive director. (AFP Photo)
by Associated Press Feb 08, 2017 12:00 am

The report from the Food and Agriculture Organization predicts that Africa's biggest humanitarian crisis likely will deteriorate during the "lean" food season between June and August in northeast Nigeria.

Worst affected is Borno state, the birthplace of Boko Haram, which may hold 65 percent of those "expected to face famine conditions."

U.N. agencies have reported that children already are dying in the region and some half a million face death if they don't get help.

Corruption and conflict between the government and aid agencies is compounding the crisis. Officials are investigating reports that local government agencies are stealing food aid.

Despite the crisis, Nigeria's cereal production went up by about 5 percent in 2016, the report said, even though the Boko Haram uprising has forced hundreds of thousands of farmers off their land.

But Nigeria remains a "food-deficit country" with cereal imports, mainly rice and wheat, forecast to exceed 7 million tons this year, it said.

Nigeria remains the world's biggest importer of rice, indicating a failure of government efforts to reduce dependence on food imports amid a crushing shortage of foreign currency caused by low global prices for oil.

Thousands of Nigerians marched this week to protest growing hardship brought on by high food prices, poverty, corruption and unemployment, among other issues.

Vice President Yemi Osinbajo told them he feels their pain but life will get better. "With complete focus on improving the economy every day, the recession will soon be history," he said in a statement Tuesday, without elaborating.
Last Update: Feb 08, 2017 6:11 pm
RELATED TOPICS