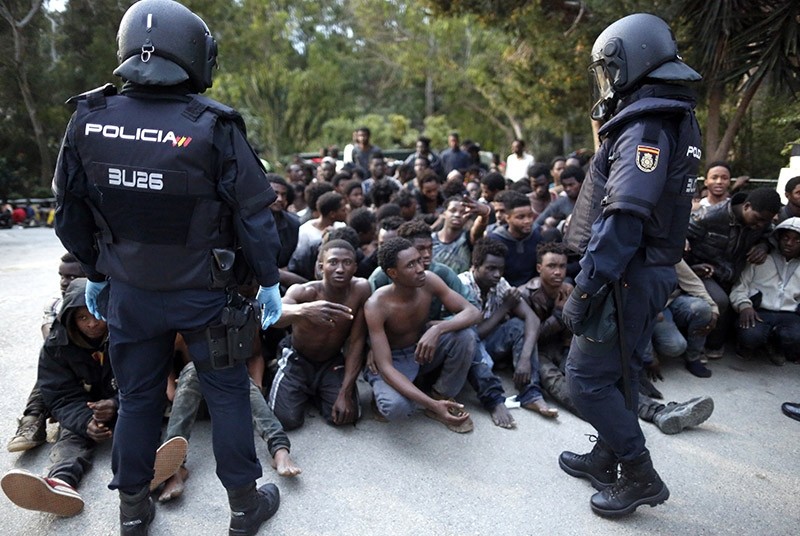 Almost 500 migrants forced their way into Spanish territory in North Africa early Friday by breaking through gates in the 20-foot (6-meter) high fence that separates Morocco from Spain's Ceuta enclave.

The Ceuta regional government gave the figures, with officials saying it was believed to be the biggest border invasion in recent years. Ceuta is separated from the rest of Spain by the Strait of Gibraltar.

Some 700 migrants attempted to smash through several gates simultaneously at about 6 a.m., a Ceuta government official told The Associated Press. He refused to be identified, in accordance with government rules.

He said 498 migrants made it into Spanish territory, with two hospitalized due to injuries they sustained in the assault. He said 11 Spanish police were also hurt.

A Civil Guard spokesman said police clashed with the migrants at the Tarajal area of the fence. He declined to disclose his identity in line with internal policy. At least 10 members of Morocco's armed forces were also injured, he said.

More than 30 migrants were treated at a migrant center for bone fractures and other injuries. Some were also cut trying to scale the fence, which is topped with barbed wire, said Clemen Nunez, director of Ceuta's Red Cross emergency response team.

According to the Civil Guard, a surveillance camera showed hundreds of people approaching the fence, using tools and clubs to break one of the gates.

In video filmed by Faro TV Ceuta, some of the migrants can be seen with blood on their faces and bruises but mostly celebrating the arrival in Spanish territory. Some wrapped themselves with Spanish and European flags and screamed "Freedom, freedom!"

Hundreds of sub-Saharan African migrants are living illegally in Morocco and regularly attempt to enter Ceuta and Melilla, Spain's other North African enclave, in hopes of getting into Europe. Most are fleeing poverty, violence or both.

On Friday, 55 of them were rejected, according to the Civil Guard, because those who are intercepted on the spot can be returned to Morocco. But those that make it over the fences are usually taken to migrant centers and eventually repatriated or let go, many choosing to seek asylum or work informally in Spain or other European countries.

Before the latest arrival, the migrant center Ceuta was already struggling to cope with more than 600 people and making use of military tents in nearby parking lots.