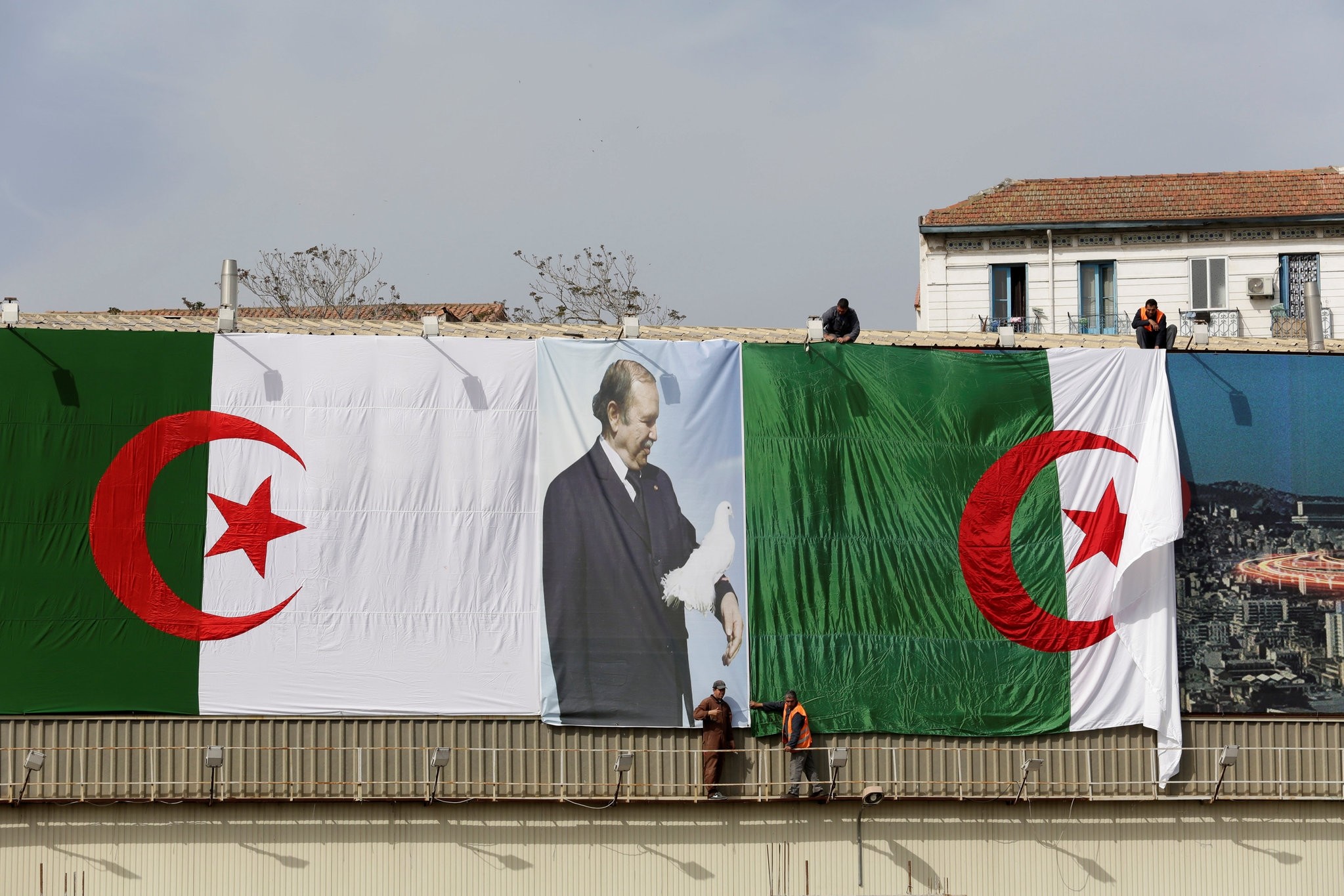 Algerian city employees install Algerian flags and President's Abdelaziz Bouteflika poster on the streets. (REUTERS Photo)
by May 04, 2017 12:00 am

Algerians vote on Thursday for a new parliament likely to hand a majority to the ruling FLN party and its allies, though turnout is traditionally low for elections to a National Assembly many voters dismiss as weak.

The ballot comes at a sensitive time for Algeria as the OPEC member tackles the economic impact of low global oil prices and a potential transition from President Abdelaziz Bouteflika who has been seen rarely since a 2013 stroke.

The National Liberation Front (FLN), which has dominated Algerian politics since independence from France in 1962, and the pro-government National Rally for Democracy (RND) are widely expected to win against a weak, divided opposition that includes leftists and conservatives.

The 462-seat National Assembly has limited powers in the presidential system where lawmakers have a five-year term. A new constitution allows parliament a say in naming the prime minister but critics see it as a rubberstamp assembly.

In the 2012 election, FLN won 221 seats and the RND 70 seats by playing the stability and security card following the 2011 Arab Spring revolts in Tunisia, Egypt and Libya. But turnout was just 43 percent.

Results for Thursday's vote will be announced on Friday morning by the interior ministry.

In power for nearly two decades, Bouteflika is widely praised for bringing the country out of a decade-long 1990s war with militants that killed 200,000 people and left many Algerians still wary of instability.

Government officials and ruling parties mostly appealed to security and continuity, with door Libya still in chaos next door following the civil war to oust Muammar Gaddafi in 2011.

A veteran of the war against colonial France, Bouteflika also oversaw a period of high oil prices that financed a massive welfare system from cheap housing and subsidised fuel and food programmes with roots in Algeria's post-independence socialism.

The FLN and RND benefit from association with Bouteflika and the government's public spending. They also gain from a low turnout as core supporters among the elderly, public workers and armed forces are most likely to vote. It also has a strong party machinery in rural areas.

Many Algerians still see Bouteflika as a symbol of continuity, but more than half of the population is under 30 and many young people say they have little connection to the historical rhetoric of their country's aging leadership.

"For five years we don't see congressmen and we have no right to talk to them, then they ask for our vote? Why should we, it's wrong," said Idir, a student in downtown Algiers.

The collapse of oil prices in mid-2014 has also bought new challenges for an economy still mostly state-run, dependent on energy revenues for 60 percent of its budget and reliant on imports because of feeble national production outside energy.

Falling earnings -- state oil company Sonatrach revenues fell to $27.5 billion in 2016 versus $60 billion in 2014 -- have forced the government to cut spending and start the sensitive task of reforming subsidies on cheap fuel and electricity.