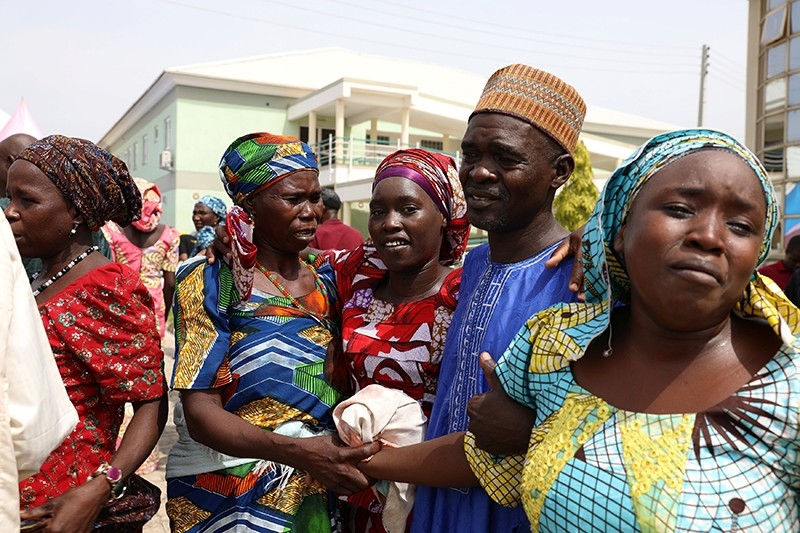 The 82 Nigerian schoolgirls recently released after more than three years in Boko Haram captivity reunited with their families Saturday as anxious parents looked for signs of how deeply the terrorists had changed their daughters' lives.

Brightly dressed families rushed through the crowd in the capital, Abuja, and embraced. One small group sank to their knees, with a woman raising her hands as if praising in church. Some danced. Others were in tears.

"I am really happy today, I am Christmas and new year, I am very happy and I thank God," said mother Godiya Joshua, whose daughter Esther was among those freed.

This month's release was the largest liberation of hostages since 276 Chibok schoolgirls were abducted from their boarding school in 2014. Five commanders from the terrorist group were exchanged for the girls' freedom, and Nigeria's government has said it would make further exchanges to bring the 113 remaining schoolgirls home.

"We have trust in this government, definitely they will rescue the rest safely and back to us alive," said community leader Yakubu Nkeki.

Many of the girls, most of them Christians, were forced to marry terrorists and have had children. Some have been radicalized and have refused to return. It is feared that some have been used in suicide bombings.

The mass abduction in April 2014 brought international attention to Boko Haram's deadly insurgency in northern Nigeria, and it launched a global Bring Back Our Girls campaign that drew the backing of some celebrities, including former U.S. first lady Michelle Obama. Thousands have been kidnapped during the extremists' eight-year insurgency, and more than 20,000 have been killed.

The release of the 82 schoolgirls this month came after an initial group of 21 girls was released in October. Nigeria's government has acknowledged negotiating with Boko Haram for their release, with mediation help from the Swiss government and the International Committee of the Red Cross.

Since the latest release, many families in the remote Chibok community had been waiting for word on whether their daughters were among them. A government list of names circulated, and parents were asked to confirm the freed girls' identities through photos.

Both groups of freed girls have been in government care in the capital as part of a nine-month reintegration program that President Muhammadu Buhari has said he will oversee personally. But human rights groups have criticized the government for keeping the young women so long in the capital, far from their homes.