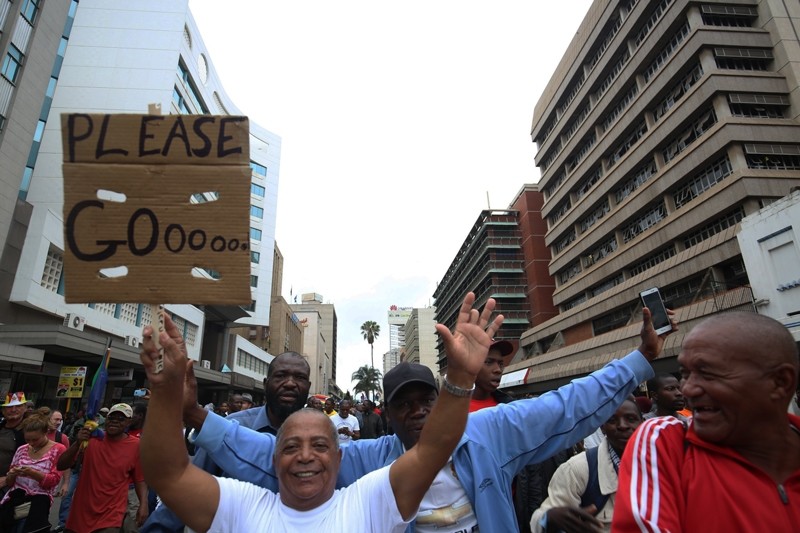 People take part in a march along the city's streets, heading for a solidarity rally, on the removal of Zimbabwean President Robert Mugabe, at the Zimbabwe Grounds in Highfield, Harare, Zimbabwe, Nov. 18, 2017 ( EPA Photo)
by Compiled from Wire Services Nov 18, 2017 12:00 am

Euphoric crowds have gathered in Zimbabwe's capital to demand the departure of President Robert Mugabe after nearly four decades in power.

In a colorful gathering that even days ago would have drawn an immediate police crackdown, Zimbabweans giddy with joy raced through intersections, raising their arms in triumph. Young men shouted, laughed and embraced.

Some had posters with an image of the military commander who swept in earlier this week and put Mugabe under house arrest, with the slogan: "Go, go, our general!!!" Marchers handed flags to soldiers, who accepted and waved.

"It's like Christmas," said one marcher, Fred Mubay, who said Zimbabweans have been suffering for a long time.

The 93-year-old Mugabe, the world's oldest head of state, is said to be asking for more time amid negotiations that seek his exit with a veneer of dignity.

But he is virtually powerless and deserted by most of his allies, and the crowds in Harare on Saturday were making it clear the country was ready to move on without him.

Even as concerns remained about who next would be in charge and what freedoms might be available if the military lingered in power or if Mugabe's longtime but recently fired deputy led a new government people reveled in the rare chance to speak out.

The demonstrators, in an event approved by the military, hope a big turnout will speed up the official end of Mugabe's rule, which is widely blamed for the collapse of an economy that was once one of Africa's wealthiest.

Crowds gathered on main streets as cars honked their horns and people whistled and cheered, even as many continued to go about their daily business.

Veterans of the long liberation war against white minority rule, once close allies of Mugabe, took part, along with opposition activists who have faced police crackdowns by the Mugabe government.
The army told state media that the rally was being allowed to go ahead but urged that it remain peaceful.

"We are now uniting a big chunk of Zimbabawe's population," said Chris Mutsvangwa, head of the war veterans. "We are calling on the people of Zimbabwe to come to the rally."

Zimbabwe's military on Wednesday seized power in a bloodless coup, placing Mugabe, 93, under house arrest and detaining some of his allies. Mugabe has been in power for almost four decades.

Many Zimbaweans have welcomed the military's move after years of economic hardship and human rights abuses.