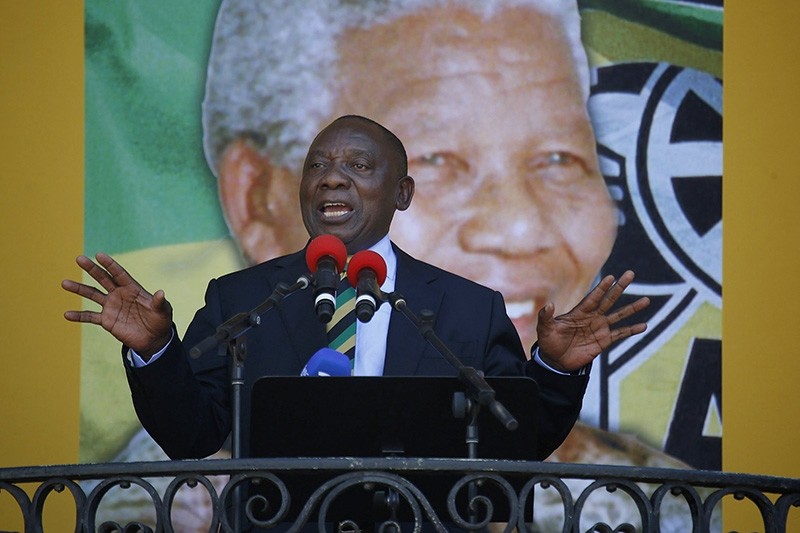 Ramaphosa, 65, said he wanted to replace "a period of difficulty, disunity and discord" with "a new beginning" for the ANC party, and he vowed to tackle the corruption that has tarnished Zuma's government.

"We know you want this matter to be finalized," he said to rapturous cheers at a rally of party faithful in Cape Town.

With the 75-year-old Zuma refusing a Feb. 4 request to resign by senior party officials, the ANC's top decision-making committee will meet on Monday.

The committee could recall the president from office, though he would be under no constitutional obligation to obey the order.

"We know you want closure -- we will be doing so keeping our eyes on what is in the interests of all our people," Ramaphosa, who is the country's deputy president, said to loud applause.

"As you have all heard, the National Executive Committee of the ANC will be meeting tomorrow... and because our people want this matter to be finalized, the NEC will be doing precisely that."

Nomaza Nkukwana, a 54-year-old unemployed woman from nearby Driftsands, said: "We liked the speech and I liked the language he was using."

"Ramaphosa must come -- then we'll be having a real president."

It was in that same vast square in front of City Hall on Feb. 11, 1990, that Nelson Mandela spoke to euphoric crowds hours after his release from prison.

That was Mandela's first major speech as a free man and a key moment in South Africa's modern rebirth as white-minority apartheid rule crumbled.

Holding the microphone for Mandela that day was a young Ramaphosa, then a trade union leader.

Zuma's presidency has been marred by corruption scandals, slow economic growth and record unemployment that have fueled public anger in sharp contrast to the mood of national optimism that swept South Africa after Mandela's release.

The stalemate over Zuma's departure has left Africa's most developed economy in limbo, with a series of public events canceled last week including Thursday's State of the Nation address to parliament.

Zuma's hold over the ANC was shaken in December when his chosen successor -- ex-wife Nkosazana Dlamini-Zuma -- narrowly lost out to Ramaphosa in a vote for new party leader.

Sunday's rally was part of ANC celebrations marking 100 years since Mandela's birth -- as well as efforts by Ramaphosa to repair the party's reputation ahead of next year's general election.

"We have arrived at a moment in the history of our country where we can relive that moment when Nelson Mandela was released.... We have a new mood right across the country, we can capture that mood and move forward," Ramaphosa said.

One case relates to 783 payments he allegedly received linked to an arms deal before he came to power.

He is also reportedly seeking legal protection for his family and other associates who have been involved in controversial deals.

"Even if the ANC meeting on Monday decides Zuma needs to step down, he can still refuse because they have no legal authority," Mcebisi Ndletyana, politics professor at the University of Johannesburg, told AFP.

"He is not willing to step down voluntarily. They need to close this thing early this week."

Opposition parties are calling for a parliamentary vote of no-confidence within days.

Zuma has not spoken publicly since being asked to resign by senior ANC officials on Feb. 4.

In 2008, the party pushed out then-president Thabo Mbeki over allegations of abuse of power.

Under Zuma, the ANC suffered its worst electoral setback since coming to power with Mandela at the helm in 1994, winning less than 54 percent of the vote in local elections in 2016.