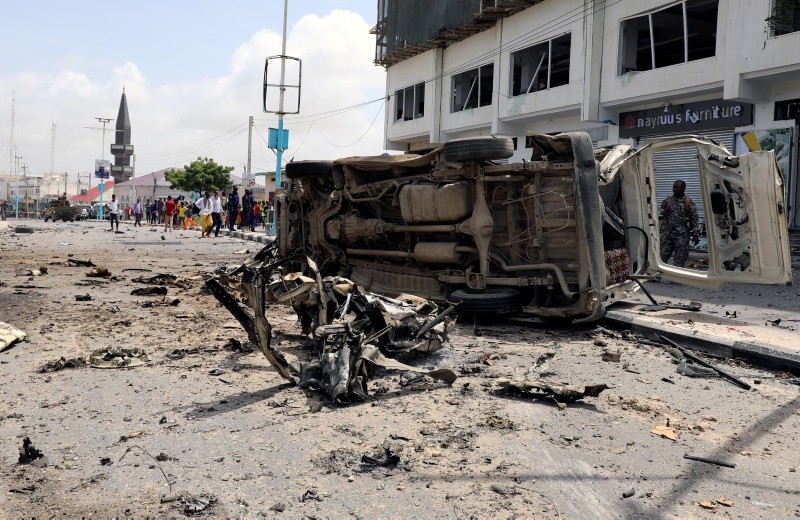 Destroyed vehicles are seen at the scene of a suicide car bombing near Somalia's presidential palace in Mogadishu, Somalia. (Reuters Photo)
by Associated Press
Jul 07, 2018 12:00 am

A least nine people were killed in an attack on Somalia's interior ministry and security forces killed all three attackers after a two-hour gun battle inside, police said Saturday, as the al-Shabab terror group claimed responsibility.

A number of people, mostly government workers, had been trapped in the ministry on what had been a normal business day. Witnesses said some staffers died or were injured while leaping from windows or walls in an effort to escape.

More than 10 people were wounded and the death toll could rise, Col. Ahmed Mohamed said.

The attack began in the morning when a suicide car bomber detonated at the gates of the interior ministry compound, which is close to the presidential palace and parliament headquarters and also holds the security ministry, police Capt. Mohamed Hussein told The Associated Press.

Dozens of people eventually were rescued in the operation, Hussein said, as ambulance sirens echoed and soldiers opened fire to disperse bystanders and motorists.

The Somalia-based al-Shabab, an arm of the al-Qaida terror group, often targets high-profile areas of the capital. It was blamed for the October truck bombing that killed more than 500 people in the deadliest attack in the country's history.

The ongoing threat from what has become the deadliest terrorist group in sub-Saharan Africa has hurt efforts to strengthen Somalia's fragile government and stabilize the long-chaotic Horn of Africa nation.

The United States under the Trump administration has stepped up military efforts in Somalia, including dozens of drone strikes, against al-Shabab and a small presence of fighters linked to the Daesh terror group. At least two U.S. military personnel have been killed.

The U.S. military and others in the international community have expressed concern about the plan for Somalia's security forces to take over the country's security from a multinational African Union force over the next few years, saying the local troops are not yet ready.