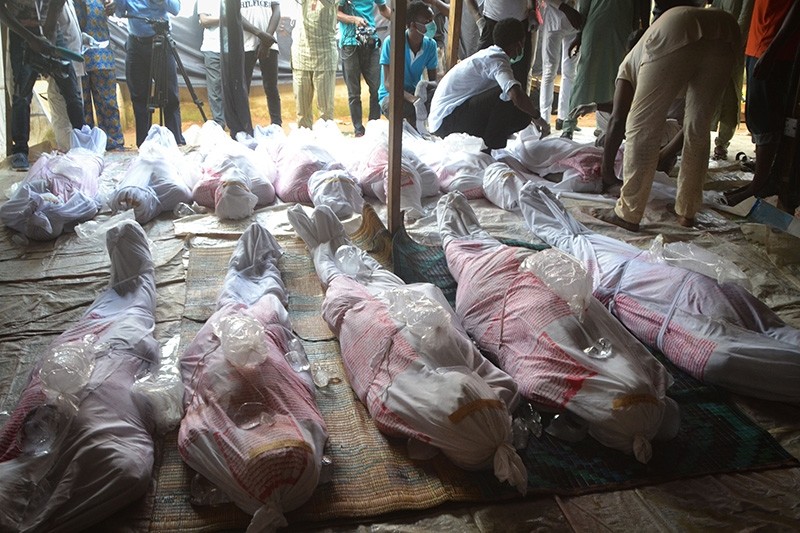 Mourners prepare to bury victims of violent clashes in Abuja between Nigeria police and members of the Islamic Movement of Nigeria (IMN) who were protesting the imprisonment of their leader Ibrahim Zakzaky on Oct. 31, 2018. (AFP Photo)
by Daily Sabah with AP Nov 04, 2018 12:00 am

Nigeria's military is facing criticism after sending out a tweet that appeared to use U.S. President Donald Trump's comments as justification for shooting and killing protesters in the West African nation.

The tweet, which has since been deleted, referenced a video of Trump where he suggested that U.S. soldiers on the country's southwestern border may open fire if migrants throw rocks at them. Trump insisted Friday that he meant that rock-throwers would be arrested.

Sickening. Under scrutiny from human rights orgs for firing on a crowd of protesters, the Nigerian Army tweets Trump from yesterday telling US troops that any migrants throwing rocks should be handled as if they are armed with "a rifle" 1/2 pic.twitter.com/2udS9fgAhm

Amnesty International has accused the Nigerian military of fatally shooting at least 45 peaceful protesters from the country's main Shiite Muslim movement at demonstrations that began last weekend. Nigeria's military said it killed only six people and claims the protesters had fired first.

Last week, Trump took aim at a migrant caravan of several thousand Central Americans making their way toward the U.S. border. Although the caravan is still some 1,200 kilometers (800 miles) from the border, Trump has mobilized troops and declared that if U.S. soldiers face rock-throwing migrants, they should react as though the rocks were "rifles."