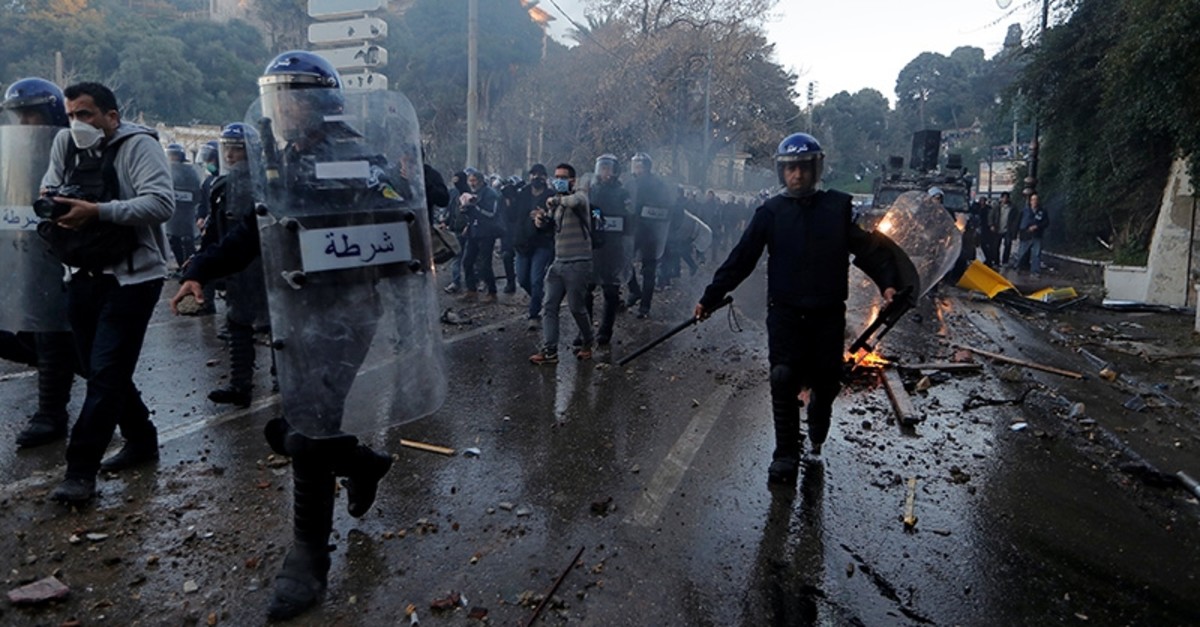 One person was killed and several people were hurt in clashes between protesters and police in the Algerian capital Friday, as tens of thousands rallied against a fifth term for ailing President Abdelaziz Bouteflika.

An informed source told Reuters that at least one protester had been killed in a stampede during the protests in Algiers.

According to a police toll, 56 police and seven demonstrators were hurt and 45 arrests made in the capital.

French Press Agency (AFP) saw about a dozen people wounded after being hit by batons, tear gas grenades and stones thrown by police back at demonstrators who had intially hurled them at officers.

A car was seen on fire as violence broke out on the margins of a demonstration which security sources said drew "several tens of thousands of people" to the streets.

Riot police fired tear gas to disperse a group of around 200 young people, around 1.5 kilometers (less than a mile) from the presidential palace.

Other sporadic clashes were reported by security sources in central Algiers, but most people appeared to have left the protest sites by 8 p.m. (1900 GMT).

Crowds of men and women of all ages had defied a ban to march along one of the city's main avenues, waving Algerian flags as they rallied against 81-year-old Bouteflika's decision to stand in the April 18 election.

"The people want the fall of the regime," some of those gathered cried, in an echo of the Arab Spring uprisings of eight years ago, while others shouted that the demonstrations were peaceful.

Earlier on Friday a photographer and journalist from local media were briefly detained by police and removed from the protest area before being released, an AFP journalist reported.

Shop windows were broken, while a bank branch was set alight, an AFP journalist said.

Other rallies were held in Algeria's second and third cities, Oran and Constantine, as well as numerous other towns and cities, security sources said.

In Oran, one of the protesters told AFP the demonstration was larger than one held last Friday.

The scale of the protests has surprised many in Algeria and represents the biggest challenge in years to the authorities.

Bouteflika, who has been in power since 1999, has used a wheelchair since suffering a stroke in 2013 and is rarely seen in public.

Despite the demonstrations, Bouteflika's campaign director said the president will meet a Sunday deadline to formally submit his candidacy.

Protesters have been mobilized by calls on social media and say the latest demonstrations are aimed not only at Bouteflika's bid to extend his 20-year tenure, but also against the ruling elite as a whole.

The head-of-state flew to Switzerland on Sunday for what the presidency called "routine medical checks" and has not yet returned.

Officials have warned that the protests risk dragging Algeria into instability, after Bouteflika helped foster peace in the wake of a civil war in the 1990s.

Calls to demonstrate have resonated with young Algerians, many of whom struggle for employment in a country where half the population is under 30.

Reporters at state radio have complained that their bosses have imposed a blackout on coverage of the protests.

Known for wearing a three-piece suit even in the north African nation's stifling heat, Bouteflika gained respect from many for his role in ending the war, which official data indicates killed nearly 200,000 people.

When the Arab Spring erupted in January 2011, he rode out the storm by lifting a 19-year state of emergency and by using oil revenues to grant pay rises.

After his stroke, Bouteflika consolidated power in a country where the shadowy intelligence service has long been viewed as a "state within a state."

In early 2016, he dissolved the all-powerful DRS intelligence agency after dismissing its leader General Mohamed Mediene, known as "Toufik," who had clung to the post for a quarter of a century.