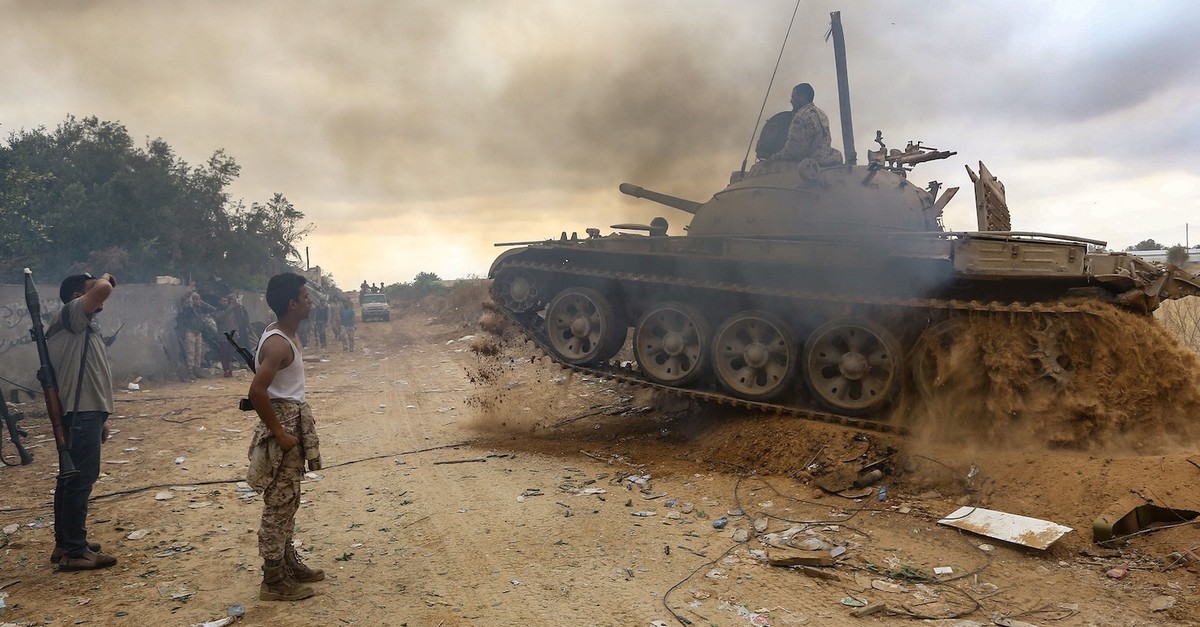 Fighters loyal to the internationally-recognized Government of National Accord (GNA) near the frontline during clashes, Tripoli, June 1, 2019.
by Yusuf Selman İnanç
Jun 04, 2019 12:12 am

Libya, which has been suffering from a political power vacuum since the ouster of Moammar Gadhafi, has three dimensions of political authority, namely kinship, ideology and relations with international powers

The Arab Spring left a burden on Arab people in the Middle East and North Africa. Similar to other conflict-torn countries, Libya has been suffering from problems that appeared due to a power vacuum. After the ouster of former President Moammar Gadhafi, a series of problems, from migration to internal conflict to human trafficking, emerged. Since the power change in 2013, Libya has seen several governments and numerous clashes. At the moment, there are three nested layers of political authority in the country. First, due to the country's tribe-based society structure kinship, generally, determines political alliances. Second, there are ideological differences among politicians. While some of them are engaged in more religious ideology, others adopt a more pro-Western agenda.

Moreover, those with religious motivations are deeply divided as some of them are close to the Muslim Brotherhood ideology, while some are financed by the Gulf. The international dimension is closely related to the former. Libya, with its large oil resources and long coasts along the Mediterranean Sea, attracts the attention of any regional and international actor.

Currently, there are three power centers in the country. The first center is the Presidency Council, based in Tripoli since 2016. This council was founded after a U.N. plan was put into effect. The plan's aim was to gather every political side under the roof of one council. This council is authorized to appoint military leaders and to select members of the Government of National Accord (GNA), which is the executive branch. There is a state council under this council, which makes some appointments to the House of Representatives. This legislative body approves members of the Government of National Accord (GNA). This organizational scheme shows that there is a well-planned system, which has checks and balances.

The second power center is the Government of National Salvation (GNS). It is based in Tripoli. However, after the abovementioned accord was signed, most of the GNS government moved to the state council. Still, its members are considered a threat to the Presidency Council.

The third center is based in the cities of Tobruk and Bayda. It is made up of certain civil and military authorities under the leadership of Gen. Khalifa Haftar. They are supposed to be under the Presidency Council and work in line with the accord.

Highlighting the differences among political actors, a report, published by European Council on Foreign Relations said: "In Libya, there are very few truly national actors. The vast majority are local players, some of whom are relevant at the national level, while representing the interests of their region, or in most cases, their city. Many important actors, particularly outside of the largest cities, also have tribal allegiances."

Each international and regional actor enjoys the tribal alliances. For instance, Egypt and the United Arab Emirates (UAE) have been giving support to Khalifa Haftar under the pretext of combating terror groups, such as DAESH and al-Qaida affiliated groups located in Libya's remote areas. The European countries are also holding talks with certain figures in the country.