7 killed as tens of thousands protest military rule in Sudan 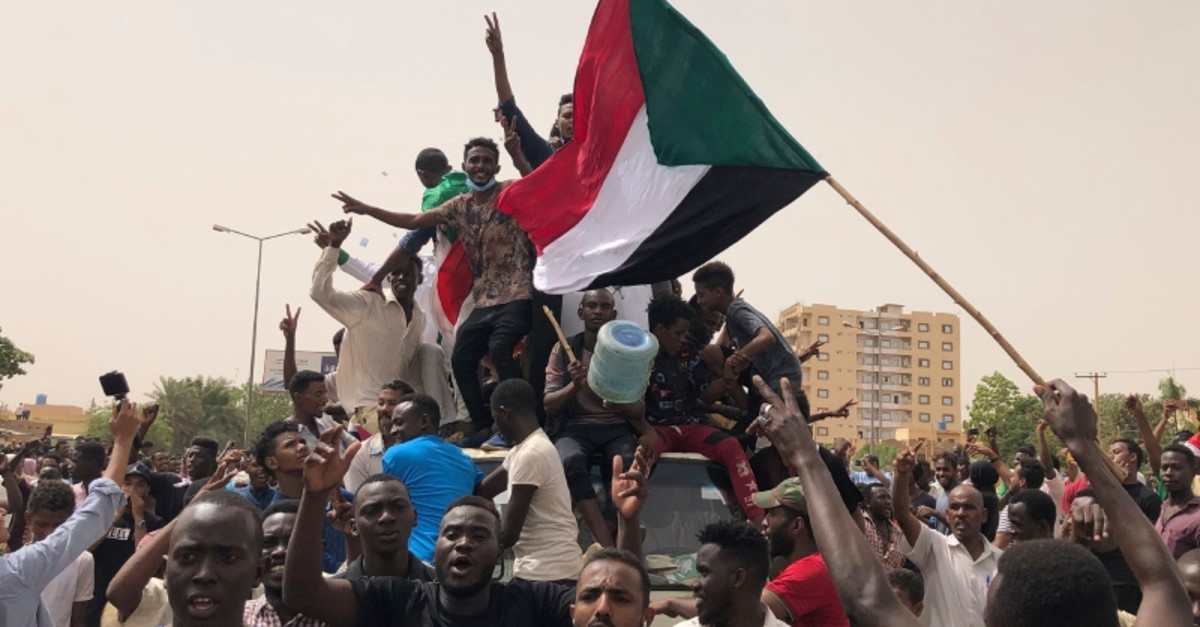 At least seven people were killed and 181 were wounded during a day of protests across Sudan, state news agency (SUNA) said late on Sunday, citing a Health Ministry official.

Tens of thousands took to the streets to demand civilian rule in the first mass rally since a bloody crackdown on protesters -- a show of people power despite heavy troop deployments by the ruling generals.

Sudanese police fired tear gas at the crowds as they approached the presidential palace, an AFP correspondent reported

Police fired at least five tear gas canisters about 700 meters (yards) from the palace in downtown Khartoum, as members of the feared paramilitary Rapid Support Forces were mobilized to stop the crowds.

"We call on our revolutionary people in the capital to go to the republican palace... to seek justice for the martyrs and for an unconditional transfer of power to civilians," the Sudanese Professionals Association that first launched protests against now ousted ruler Omar al-Bashir said on Twitter.

Police also fired tear gas at protesters in the northern Khartoum district of Bahri and in Mamura and Arkweit, in the capital's east, as thousands of protesters chanted "Civilian rule! Civilian rule!", witnesses said.

"We're fed up with the military. For decades this country has been ruled by the military. It didn't work and it will not work," said protester Nada Adel, 28.

"Despite what they did at the sit-in, despite the people they killed... the revolution will not die in the hearts of the youth."

Elsewhere, security forces used tear gas to disperse protests in the capital's twin city of Omdurman and the eastern town of Gadaref.

A doctors committee linked to the protest movement later said that five protesters had been killed during the day.

"The death of four martyrs in the city of Omdurman on the road of our victorious revolution brings the number of martyrs to five" in Sunday's protests, the committee said, after it reported earlier that a protester was shot dead in the town of Atbara.

"There are several seriously wounded by the bullets of the military council militias in hospitals of the capital and the provinces."

The deputy chief of the ruling military council said that snipers had shot at least three members of the feared paramilitary Rapid Support Forces (RSF) and five or six civilians in Omdurman.

"There are infiltrators, people who want to jeopardize progress," General Mohamed Hamdan Dagalo, who also commands the RSF said at a rally.

"No one gave a mandate to the military council, all the people are against the council," said a protester who shouted out "I'm the next martyr."

Marchers also passed by the homes of those killed on June 3 as onlookers cheered and motorists honked horns.

The protest movement erupted in December, triggered by an economic crisis. The protesters remained in the streets after al-Bashir was overthrown and jailed, fearing that the military would cling to power or preserve much of his regime.

Video clips showed protesters running away from security forces in the streets of Khartoum and seeking shelter from clouds of tear gas.

On a highway leading to Khartoum's international airport, a convoy of troops and riot police allowed some demonstrators to pass through as they headed toward the house of a protester who was killed earlier this month.

The protester's mother was standing outside and joined the demonstration. They waved Sudanese flags and chanted slogans calling for civilian rule.

The SPA described the protest as "monumental and unique."

"Not only because of the unprecedented huge crowds, but because the masses have committed themselves to peace and chosen the path of nonviolence to achieve their revolutionary goals."

The RSF was deployed in pick-up trucks mounted with machine guns in several Khartoum squares.

In the run-up to the protest many Sudanese hoped that Sunday's rally would break the fear that had gripped them since the June 3 raid.

"Even if only a few rallies take place in Khartoum, they will break the barrier of fear and more people will take to the streets" in coming days, said protester Talal, 29.

The African Union and Ethiopia have stepped up their efforts to mediate an end to the crisis and reach a deal over setting up a new transitional government.

Earlier this week the AU and Ethiopia extended a joint proposal. The generals and the protesters voiced their approval but did not immediately restart negotiations.

The military council said in a statement that it submitted its response to the envoys, and that the generals are ready to resume negotiations on Sunday based on the AU and Ethiopian proposal. Lt. Gen. Shams Eddin Kabashi, a spokesman for the council, said it was hoping to reach a "comprehensive political solution" under the umbrella of the AU.

However, the Forces for Declaration of Freedom and Change, which represents the protesters, said talks could only begin once the military has officially ratified the AU-Ethiopian proposal. Al-Mustafa said talks would resume "directly after the military council signs the proposal."