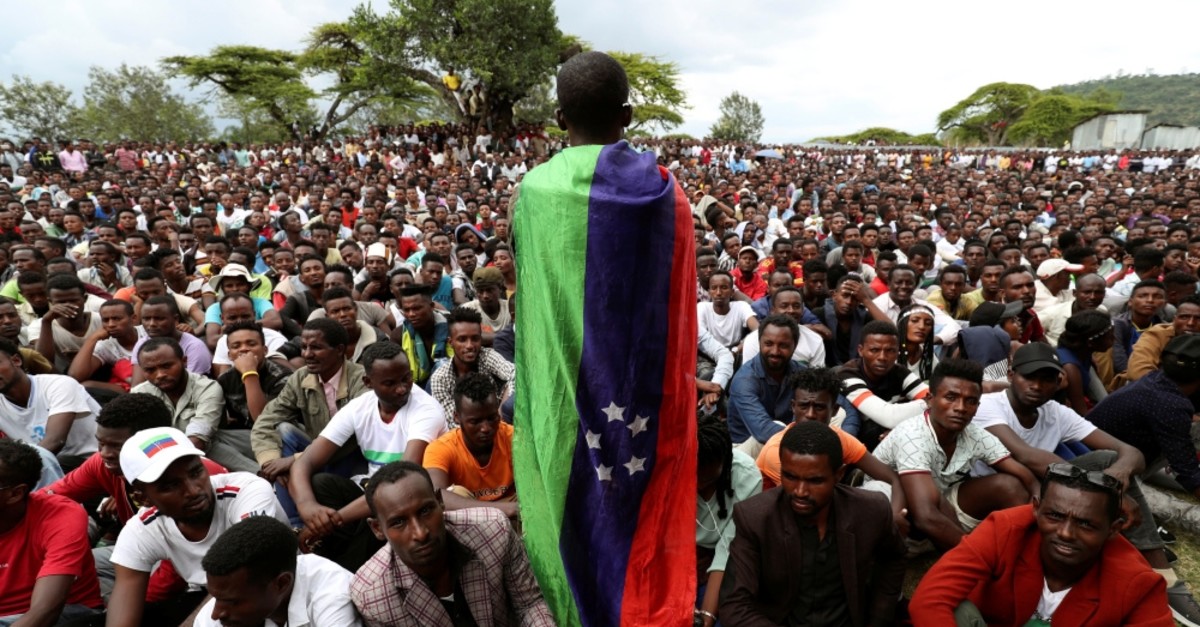 A Sidama youth leader draped in a flag addresses people as they gather for a meeting to declare their own region, Hawassa, July, 17, 2019.
by Compiled from Wire Services Jul 21, 2019 12:28 am

At least four people have died in Ethiopia's southern city of Hawassa, hospital authorities said on Friday, amid a showdown between state security forces and some local activists who want to declare a new region for their Sidama ethnic group.

The threat of large-scale violence in Hawassa city center on Thursday was largely averted after a Sidama opposition party agreed to delay declaring their own region and accept a government offer to hold a referendum in five months. The threat to unilaterally declare a new region was a direct challenge to the authority of the Ethiopian federal government, which oversees nine regions in the nation of 105 million people.

Prime Minister Abiy Ahmed, appointed by the ruling coalition last year, has been widely praised for political reforms in what was once one of the continent's most repressive nations. But many Ethiopian activists are now using their greater freedoms to demand more rights, sometimes for their own ethnic groups. At least eight other ethnic groups beside the Sidama also want their own regions. The tensions sometimes spark violence. In Hawassa, not all Sidama people accepted the decision to delay the declaration. Some activists were still on the streets on Friday and most shops were still closed.

Police arrested individuals who took part in the violence that resulted in loss of life and properties, according to Fana. Hawassa Referral Hospital has received 12 injured civilians in the last two days, three of whom died, said general manager Zinaw Serniso. Some had fractured bones after being hit with batons and others had been shot, he said. One man shot in the head died on Thursday, and two more shot in the leg and abdomen died on their way to the hospital on Friday, he said.

The Sidama have agitated for years to leave the diverse Southern Nations, Nationalities, and Peoples' Region of which they are a part, and create their own state. The group, the largest in the state, said the deadline for the referendum was yesterday. However Ethiopia's election board said this week it would hold a referendum before the end of the year. It said it had not received the referendum request until November 2018, meaning it still had several months to hold the vote.