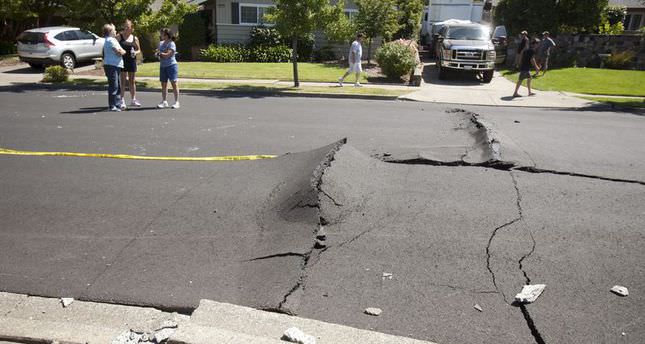 by reuters Aug 25, 2014 12:00 am
A 6.0 magnitude earthquake rocked wine country north of San Francisco early on Sunday, injuring more than 100 people, damaging historic buildings, setting some homes on fire and causing power outages around the picturesque town of Napa.

The quake, the biggest in the region in 25 years, jolted many residents out of bed when it hit at 3:20 a.m.. It was centered 6 miles (10 km) south of the city of Napa, which is located about 50 miles northeast of San Francisco.

There were no known fatalities, but three people were seriously injured, including a child who suffered multiple fractures after a fireplace fell on him, local fire battalion chief John Callahan said. Six fires broke out, including one that consumed six mobile homes, he said.

Queen of the Valley Medical Center in Napa said it had treated 120 patients injured in the quake, which was strong enough to be felt throughout the San Francisco Bay Area.

"They say it went for 50 seconds. It felt like 50 minutes. I was just too terrified to even scream," said Patricia Trimble, 50, the owner of an antique store. She rushed to her store in central Napa and found the front window blown out, cabinets on their sides and merchandise littering the floor.

Graphic on the Napa quake: link.reuters.com/tud72w)

California Governor Jerry Brown declared a state of emergency, putting all state resources at the disposal of his Office of Emergency Services.

Despite the force of the quake, it ranks as only moderately strong.

California, which sits along a series of seismic faults, is forecast to experience a much more powerful earthquake at some point, but scientists do not know when it might come or how strong it would measure, a geophysicist with the U.S. Geological Survey (USGS), Don Blakeman, said.

"Usually when people talk about 'The Big One,' they're talking about something on the order of a magnitude 9, which of course is tremendously more powerful" than Sunday's quake, he said.

The biggest impact was centered around Napa, a famous wine-producing region and a major tourist destination in northern California.

Brick facades gave way in the historic section of downtown Napa, a city of 77,000, and bricks fell off a second floor corner of the courthouse, which showed cracks. On the main street, masonry collapsed onto a car.

One building housing winery tasting rooms had to be closed to tourists, and the floors of many wine stores were stained red from the contents of broken wine bottles.

Tyler Paradise, general manager of Cult 24 wine bar in Napa, estimated his business lost $50,000 worth of bottles that spilled out of cabinets and littered the floor.

As dawn broke, merchants were on the streets sweeping up debris and boarding up windows.

State emergency officials said Sunday afternoon that 90 to 100 homes in Napa were "red-tagged," meaning they were not safe to enter.

Mark Ghilarducci, director of California Governor's Office of Emergency Services, said most of downtown Napa had been cordoned off as crew assessed building damage. City officials said all schools would be closed Monday so that buildings could be checked for structural damage.

Police in the nearby city of Vallejo said the initial assessment of damage was in excess of $5 million, and one building on Georgia Street with eight residential units was evacuated because of structural concerns.

By mid-afternoon, 20,000 to 25,000 people were still without power, down from 70,000 after the earthquake hit. "Right now, things are stabilizing a little bit," said Ghilarducci.

Napa City Manager Mike Parness said it could take a full week before the city was fully restored.

"We're seeing people coming together and helping people and getting buildings back on line as soon as possible," Parness told a midday news conference.

USGS said the epicenter of the quake was 5 miles (8 km) northwest of the town of American Canyon, on the northern edge of the San Francisco Bay.

It was the largest to hit the Bay Area since the Loma Prieta quake in 1989, which killed 63 people and caused $6 billion in property damage. That quake measured 6.9, while the famous one that leveled San Francisco in 1906 measured 7.8.

"It was long. I think it was the biggest one since I felt the 1989 quake," said Stephanie Martin, 47, a nursing assistant in Oakland, which sits just across the bay from San Francisco.

"Nothing tipped over, thank God. Rolling back and forth. Just woke us all up," she said.

John Parrish, state geologist with the California Department of Conservation, said the quake most likely occurred along the West Napa Fault in Napa County.

Throughout Sunday, 50 to 60 after-shocks hit the area, the largest clocking in at a 3.6 magnitude.

Parrish said it was unlikely that a larger earthquake was yet to come, but he warned that it was likely that the area could experience smaller after-shocks for the next couple of days.

Structures damaged in the quake would be dangerous to enter, especially during after-shocks, he said.

"This is a good time to remind everyone that we live in earthquake country. None us are immune to any of this," said Parish, urging the public to "resupply earthquake kits."