Obama urges progress in Myanmar ahead of rare roundtable 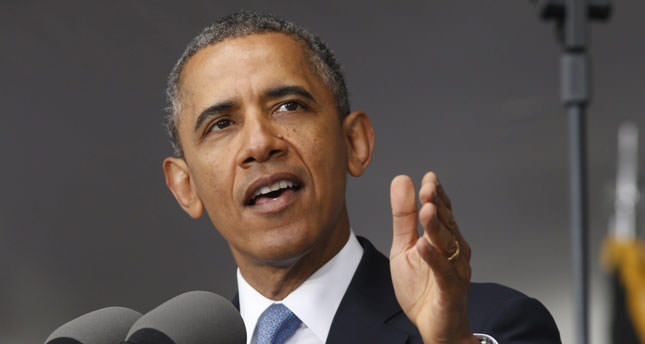 by reuters
Nov 01, 2014 12:00 am
U.S. President Barack Obama urged Myanmar's government to make every effort to conclude a national ceasefire and protect the rights of minorities, just hours before the country's president and the military chief met opposition political parties and ethnic minority groups. Some critics are calling Friday's hastily arranged get-together an attempt to burnish Myanmar's image ahead of a visit by Obama next month, his second to the country. The roundtable meeting in the capital Naypyitaw, the first of its kind, comes as a peace process with ethnic rebels teeters on the brink of collapse and amid growing U.S. concerns about human rights abuses, including the jailing of journalists and alleged oppression of stateless Rohingya Muslims and ethnic minorities. Obama spoke to Myanmar President Thein Sein on Thursday by telephone, urging that "every effort be made to conclude a national ceasefire in the short term", the White House said. The U.S. president, who will visit Myanmar for a regional summit on Nov 12-13, also stressed the importance of taking more steps to address the humanitarian situation in Rakhine state as well as measures to support the civil and political rights of the Rohingya people, the White House said. Violence erupted across Rakhine in 2012 between ethnic Rakhine Buddhists and Rohingya Muslims, killing at least 200 people and displacing 140,000, most of them Rohingya. Obama also spoke to opposition leader Aung San Suu Kyi, the White House said. The official purpose of Friday's talks has not been disclosed. The talks are being held as cracks widen in the fledgling democracy ahead of an election next year. In particular, tensions linger over moves by Suu Kyi's party, backed by 5 million petitioners, to amend the constitution and reduce the political clout of a military that ruled Myanmar brutally for 49 years. Suu Kyi is meeting for the first time with the powerful armed forces chief, Senior General Min Aung Hlaing, at Friday's talks. News of the meeting so close to Obama's arrival has been met with skepticism in Myanmar, with some calling it theatre. "The government seems to intend to use this meeting in creating a good impression before President Obama's visit," said political analyst Yan Myo Thein. "There's little chance of seeing tangible results." The government should instead focus on bringing some unity and openness to a nascent political system that was facing headwinds, he said, adding details of what transpires at the meeting should be revealed "with complete transparency and accountability".