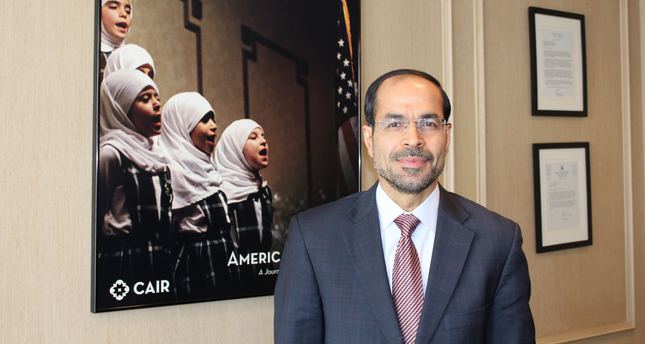 The leader of the biggest Muslim organization in the U.S. criticized ISIS’ actions in the supposed name of Islam, and said that Muslims are paying a very heavy price because of the activities of extremist groups in the Middle East

Nihad Awad, a soft-spoken Palestinian-American, is the executive director of Council on American-Islamic Relations (CAIR) and a leading figure within the Muslim community and the U.S. capitol. In an interview with Daily Sabah, Awad rebuked American media for their misrepresentation of Islam, condemned the international community's inaction in Syria and offered insights into problems related to Islam in America. He and dozens of scholars around the world recently signed an open letter explaining why the Islamic State of Iraq and al-Sham (ISIS) is not Islamic by relying on the Quran.

Daily Sabah: Let's start with the latest declaration you and other scholars signed that targets ISIS for its crimes and emphasizes that it is not Islamic at all. Do you think it will make a real difference for the recruits?

Nihad Awad: Anyone who looks at the crimes committed by ISIS will know that it is in direct violation of Islam and its teachings. The actions of Isis are inconsistent with Islamic values and the clear instructions of the Quran, which instructs us to save human lives, including those of combatants, and not destroy civilian institutions and assets. Secondly, we are doing our duty to reclaim Islam from the criminal industry that is using its name and its symbolism with the concept of "khalifa," or the flag, and the declaration of faith, or the seal of the Prophet Mohammed (peace be upon him). All of these symbols have been used as tools to recruit young people to join their enterprise, and it was incumbent upon scholars and leaders around the world to make sure that there is no legitimacy given or silence on this issue. It was a global effort to issue a refutation in the form of open letter, and it is not just a letter; it was a point-by-point rejection of their rhetoric using classical religious text to dismantle the argument ISIS leaders have used to justify their acts. Definitely more efforts are necessary to make sure that this is the Islamic position on crimes that are taking place in the region.

DS: As far as we can see in the press, and it was on your website as well, police and FBI surveillance targeting American Muslims is increasing. Do you think the Muslim community in the U.S. is paying for the crimes of ISIS?

Awad: Unfortunately, the image of Muslims and Islam in the U.S. and the way Muslim Americans are viewed, treated and perceived is not based on their contributions and their identity as citizens of the United States, but by foreign events that are taking place outside of U.S. borders, especially at the hands of people like ISIS. So, we are paying a heavy price and the image of Islam is paying heavy price as well because of the direct violations to Islamic teachings and values on the ground by people who profess to be Muslims.

DS: A study by the Pew Research Center conducted in July showed that Americans dislike Muslims more than atheists, Jews and Evangelical Christians. Do you think Muslim society in the U.S. is in danger because of the rise of Islamophobia?

Awad: Islamophobia has been mushrooming in the U.S. and has been fed by foreign events, especially by the impact of the failed foreign policy in the region and definitely by historic stereotypes about Muslims. The image of Islam and American Muslims have been defined by foreign events, not by what Muslims Americans are doing for themselves and the country. Secondly, U.S. media have unfortunately focused on defining the image of Islam based on what some Muslim groups or criminal gangs are doing overseas, and I think it has reduced the image of Islam to the political conflict that is taking place in the Middle East and certain other countries. And this is crucial because imagine that you have at least 40 people that are killed every day in the U.S. Imagine there is a foreign media outlet that focuses on the killings of these 40 people in the U.S. in order to define the American way of life, an American reality. It would be unfair and inaccurate, yet this is what we have today. U.S. media defined Islam and Muslims through the political conflict that is taking place in the Middle East. Therefore, the ultimate result is a negative image of Islam because what the average American person sees on TV about Islam relates to bloodshed, killing, occupation and strife.

DS: And there is the danger of anti-Islamic views entering the mainstream. For example, Bill Maher's recent comments on Islam such as, "Islam is the only religion that acts like the mafia that will f**king kill you if you say the wrong thing," and, "The Muslim world has too much in common with ISIS" was repeated by the media for days. Did you see such anti-Islamic comments in mainstream media before?

Awad: Bill Maher is an unsophisticated individual when it comes to religion and obviously he is bigoted; such ignorant statements add fuel to the fire. His statement is both wrong and offensive. He should be condemned for playing a role in reinforcing misunderstandings and misconceptions about Islam and I wish that HBO would exercise its authority to put pressure on him. Had he said what he said about Christians, Jews or blacks, HBO would have fired him a long time ago. So, it is a double standard, and he unfortunately uses his immense platform to broadcast off-the-chart statements that threaten the safety of all American Muslims.

DS: Do you see any correlation between U.S. policies in the region and the emergence of ISIS? Most scholars claim that mistakes done in Iraq and Syria inflamed sectarian tensions in the region and helped the extremist organizations to take root there.

Awad: Even policy makers would agree with that the U.S. invaded Iraq based on lies. Now we look at Iraq and it is destroyed and fragmented. And even the more recent support of the U.S. administration to the sectarian government of Nouri al-Maliki, which excluded main components of the Iraqi population from decision-making, has led to the worsening situation on the ground. Therefore, not only have mistakes that have occurred in previous administrations but also continued to happen due to the lack of a robust strategy. President Obama admitted that a few weeks ago that he did not even have a strategy. Maybe he misspoke, but even the current strategy in place is not effective. Thus, the U.S. administration and its allies have to retool their policy and have to conjure a more effective, more inclusive strategy to deal with the problems in the region.

DS: Some commentators accuse Western powers for being two-faced regarding Syria and ISIS. For example, Western powers were mainly unmoved by Syrian President Bashar Assad regime's brutal killings and massacres, but now there is an anti-ISIS coalition still neglecting Assad. For some, he is the root of the entire problem. What is your opinion about this?

Awad: We should not put the blame squarely on ISIS. Although ISIS must be blamed for its actions, it is the symptom, not the disease. The symptom of a disease that is injustice, which has been taking place in the region, includes the absence of democracies, the killing of innocent people, especially the Syrian population at the hands of Assad's brutal regime, and the lack of leadership of the international community to do its part to support moderate forces to topple the dictator, Assad. These things have given birth to groups like ISIS, so I agree that a lot should have been done and maybe whatever has been done now is too late, especially for those who lost their lives. However, bombing ISIS or only using force is not the only answer. There should be a comprehensive strategy and plan to address the issues and grievances that even groups like ISIS have been misusing.

DS: I was in Detroit for the ISNA convention in September and I realized that there was much admiration for and a huge interest in President [Recep Tayyip] Erdoğan and Turkey. What is your opinion about that? Is there really an interest towards him and Turkey by Muslim-Americans?

Awad: In general, I think Turkey, the Turkish government and President Erdoğan enjoy much respect and admiration among Muslims worldwide, including American Muslims. They are not a victim of media misrepresentations or smear campaigns, and so among the other leaders and other countries that we see today, Turkey remains a hopeful model for Muslims who aspire to live in a modern Islamic society. But that experience is definitely not perfect given the situation. People look up to the Turkish model because it has gone through growth, development and faced challenges, and the Turkish people have given a vote of confidence to those who serve them, those who best represent their interests, balanced the way business of the nation is conducted and that spilled over due to the current situation in the region. There is chaos in the region and a lack of leadership; there is much injustice and with the Turkish people and government showing support to the Arab Spring, they stood by people – most importantly, stood by oppressed people. I personally respect the President and the Turkish experience, and I would say that most Muslims do as well.