Obama: Americans expect us to focus on their ambitions 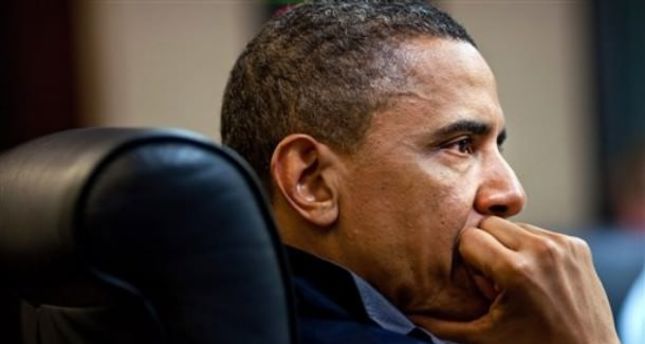 President Obama says his party's loss in the midterms was a message from Americans to focus on them. Meanwhile, with Republicans split and the appetite for war low, major policies are unlikely to change

The results of the mid-term elections this week was a message from the American people to Democrats to focus on their ambitions, President Barack Obama said on Wednesday. The president spoke to reporters a day after his Democratic Party saw Republicans take control of both houses of Congress. "What stands out to me, though, is that the American people sent a message," Obama said. "They expect us to focus on their ambitions and not ours." Although hard choices await Obama as he prepares to deal with a Republican-controlled Congress, Obama said, "I am very eager to hear Republican ideas for what they think we can do together over the next couple of years."

Obama said there are three areas the parties can work on together during the next several weeks before Congress wraps up for the holidays and the next Congress takes the oath of office in January. He said he would submit a request to Congress to pass a bill to fund efforts to combat the spread of Ebola in Africa, seek new authorization to use military force against the Islamic State of Iraq and al-Sham (ISIS) and to pass a budget for the rest of the fiscal year in order to avoid a government shut-down. "I hope that they'll do it in the same bipartisan, drama-free way that they did earlier this year. When our companies are steadily creating jobs, which they are, we don't want to inject any new uncertainty into the world economy and to the American economy," he said.

Obama acknowledged that Republicans now have sufficient majorities to make real progress and said he will spend a lot more time with the opposition as it is "the only way that we're going to be able to get some stuff done." However, he also said that he would remain firm on certain issues such as health care and immigration reform. Republicans have attempted to repeal the Affordable Care Act, also known as Obamacare, more than 40 times.

"On health care, there are certainly some lines I'm going to draw. Repeal of the law I won't sign," Obama said, adding that he would be cautious against recommendations from Republicans for changes that would undermine the structure of the health care law.

Obama also urged Congress to pass an immigration reform bill that has long been opposed by Republicans. A proposal by Obama would grant a path to citizenship for undocumented immigrants, for reasons that include, he says, that they have contributed to the U.S. economy and served the country. "This is an issue I actually wanted to get done in my first term and we didn't see legislative action. And in my second term I made it my top legislative priority. We got really good work done by a bipartisan group of Senators but it froze up in the House," Obama said.

He also encouraged Republicans to pass a reform bill so that his executive actions on the issues will not be needed. "I will engage any member of Congress who's interested in this in how we can shape legislation that will be a significant improvement over the existing system. But what we can't do is just keep on waiting. There is a cost to waiting. There's a cost to our economy. It means that resources are misallocated," he added.

Despite both houses of Congress now being under Republican control, it is unlikely that U.S. foreign policy will see dramatic changes in the years ahead, say experts. Fueled by popular discontent with Obama, Republicans took Senate control on Tuesday night following tightly contested midterm elections in which a little more than a third of Senate seats, and all 435 House seats, were up for grabs. Republicans needed a net gain of six seats to take control of the Senate. And they more than did so, winning the chamber in a blowout and handily maintaining their hold on the House. "The results of last night were really the nightmare scenario for Democrats," said John Hudak, a fellow in governance studies at the Brookings Institution. "It is in many ways the worst outcome that they could have predicted in terms of the number of Senate seats that were lost." The last two years of Obama's second term are now likely to see continued clashes with an adversarial Congress as the president seeks to pursue policies at home and abroad. Gridlock will now "absolutely prevail" in Washington, Hudak said.

The division of powers within the American system places foreign policy firmly within the purview of the president. But congressional approval is required for funding and sanctioning war and the appointment of key foreign posts. "The good thing about the American system is that foreign policy is almost solely constitutionally in the hands of the president of the United States," said Mark Perry, an independent analyst. "I don't think there is any question that we're going to see more complaints and more criticism of Obama, but are we going to see any action on the part of the Congress to embrace a foreign policy agenda? I doubt it."

Whether attempting to push back on Russia's continued actions in Ukraine or end Syria's ongoing civil war and the spillover that has decimated much of the region, the lack of an appetite at home for expansive military confrontations will likely silence some of the more hawkish voices in Congress. "The Republicans who were elected yesterday are very unlikely to promote intervention, or vote for more money for war costs that are upwards now of $2 trillion over a period of 15 years. It's just not a very smart economic policy, and the Republicans are going to be very careful not to do that," Perry said. Richard Weitz, the director of the Hudson Institute's Center for Political-Military Analysis, said the impacts of the election are not "easy to predict, because the Republicans are divided, and it is easy to see what they profess to be against – Obama and anything he's doing – but in terms of where they want to go, it's questionable."

What might unite Congress, however, is opposition to a prospective deal between the P5+1 group of global powers and Iran over the Islamic republic's nuclear program. "They're going to attack it no matter what the terms are going to be. Whatever the terms are, they're going to say 'it's too soft, you made too many concessions, weak leadership. Republicans would have stood out for better terms,' " Weitz said. Reza Marashi, the director of research at the National Iranian American Council, said that the Republican takeover is unlikely to completely derail Obama's efforts, but it may "weaken America's hand" at the negotiating table. Asserting that Tehran will now question Washington's ability to follow through on key aspects of any deal, he said, "The White House will have to come up with creative ways to demonstrate to the Iranians that America will follow through at the end of the bargain." Iran has insisted on the removal of economic sanctions as an end result of any prospective deal.

Even prior to Republicans taking full control of Congress, there were rumblings that Obama may circumvent Congress in lifting sanctions. Such action may have been made more likely by Tuesday's results. David Mack, a former State Department official whose career has focused heavily on the Middle East, said that some members of Congress may attempt to prevent the president from lifting sanctions, but "once again, there will be divisions within the Republican Party, with significant and important Republicans wanting to go along with an agreement."

While tensions may mount as the deadline on nuclear talks at the end of the month is fast approaching, neither Obama nor Republicans are likely to see dramatic internal changes as the president closes out his final two years.