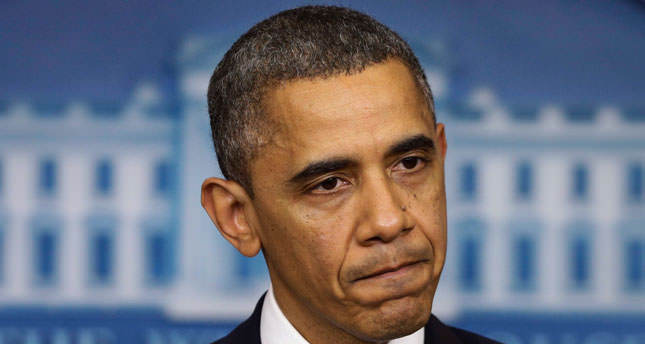 Since the airstrikes carried out by the U.S.-led anti-ISIS coalition have not heavily damaged ISIS so far, U.S. President Obama demanded his advisers build a new policy that includes the removal of Assad

U.S. President Barack Obama has told his advisers to review the U.S. policy toward Syria, after realizing that the self-proclaimed Islamic State of Iraq and al-Sham (ISIS) cannot be defeated as long as Syrian President Bashar Assad remains in power, CNN reported on Wednesday.

CNN said that Obama's national security team have held four meetings in the past week that were driven by how the administration's Syria strategy fit into its campaign against ISIS, which controls a large amount territory in Syria and Iraq. "The president has asked us to look again at how this fits together," CNN quoted one senior official as saying. "The long-running Syria problem is now compounded by the reality that, to genuinely defeat ISIS, we need not only a defeat in Iraq but a defeat in Syria," the official said.

A White House National Security Council official said, "The strategy with respect to Syria has not changed," Reuters news agency reported. U.S.-led forces have conducted 16 air strikes in Syria, most of them around Kobani near the Turkish border, and seven in the oil-producing northern region of Iraq since Monday, U.S. Central Command said. Ten air strikes conducted by the United States and its allies near Kobani hit eight small ISIS units, damaged three fighting positions and destroyed a logistics facility, Centcom said in a statement on Wednesday. In Iraq, five air strikes near Baiji, home to an oil refinery, struck one large ISIS unit, three small ones and destroyed two buildings, two vehicles and a sniper position used by the militants, it said. The other two strikes hit near the oil city of Kirkuk in Iraq's Kurdish-dominated north.

The official who spoke to Reuters said Obama's national security team "meets frequently to determine how best to carry out the strategy he set forth to counter ISIS in Iraq and Syria through several military and non-military lines of effort."

"While the immediate focus remains to drive ISIS out of Iraq, we and coalition partners will continue to strike at ISIS in Syria to deny them safe haven and to disrupt their ability to project power," the official added. Stating that Obama had made clear that Assad had lost his legitimacy, the official said: "Alongside our efforts to isolate and sanction the Assad regime, we are working with our allies to strengthen the moderate opposition."

The Free Syrian Army (FSA) warned the U.S. that the regime benefits from the airstrikes as the world becomes blind to what happens in the other parts of Syria. Before the anti-ISIS coalition was built, the regime had stopped carrying out aerial attacks on the rebel-held areas. However, immediately after the anti-ISIS coalition started bombing ISIS, Nusra Front and Ahrar al-Sham group, the regime intensified its attacks on rebel-held Aleppo which plays such a strategically crucial role in the war. Several FSA commanders accused the U.S. of being deaf to the Syrian people's pain and the atrocities committed by the regime.

Previously, U.S. Pentagon Chief Chuck Hagel and White House National Security Adviser Susan Rice voiced similar concerns about the airstrikes. Rice said the solution in Syria will "ultimately have to result in Assad's departure." She added, "You have an illegitimate and exceedingly violent leadership that has created conditions that have not only been so harmful to the population, but have made it a very attractive magnet for terrorists." Hagel warned that Assad may "benefit" from U.S.-led airstrikes targeting ISIS. "As we and the coalition go after ISIS to help the Iraqis secure their government, and also the Middle East, yes, Assad derives some benefit from that, of course," Hagel said.
In the Senate elections, held on November 4, the Republicans gained an unexpected success against Obama's Democrats and it is known that prominent Republicans, like John McCain, have been advocating a policy that aims to topple Assad. Expectedly, the Republicans will support a change in Syrian policy, if the policy includes the removal of Assad.

Beside the criticism against Obama's policy, the rebels also said they face the threat of losing the areas that they control as ISIS has started re-allying with the al-Qaida affiliated Nusra Front and the regime increased the attacks. Last week, the Nusra Front seized a town and several villages in Syria's Idlib province, the Britain-based Syrian Observatory Group for Human Rights reported. The observatory said Nusra fighters captured the town of Khan al-Subul after the withdrawal of the Hazm movement, a moderate opposition group. The al-Qaida affiliate also seized another five villages in the province held by moderate rebel groups, the observatory said. The regime's forces have also killed more than 100 people in the last two weeks and made advances near Aleppo.