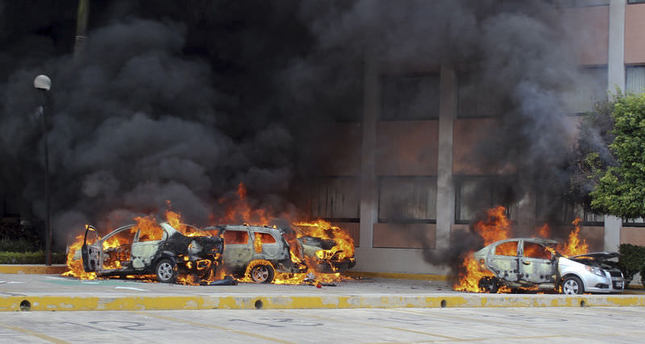 by Daily Sabah with Agencies Nov 14, 2014 12:00 am
Many Mexicans have been outraged by the disappearance of 43 students,and have been holding protests in provinces across Mexico. The missing students had been attending demonstrations before they were reported missing in Iguala, a town close to the Mexican capital, Mexico City.

According to reports, the 43 missing students, from a rural teachers college in Guerrero province, had attended protests and confronted with police, on September 26th, in the city of Iguala. The students were detained, allegedly as per requests of the town's former mayor, José Luis Abarca, reports claimed. The reports, which came from Mexican authorities, also included the name of the former mayor's wife Maria de los Angeles Pineda, and stated that the former mayor and his wife are known for their illegal ties to the drug gang, Guerreros Unidos.

Outraged masses in Mexico have argued that the gang members have claimed to have murdered the missing students, a claim which was later supported by Mexico Attorney General Jesus Murillo. According to Murillo, the evidence on hand suggests that the 43 students were killed by the gang members, their bodies burned, and their ashes thrown into river.

This week anger has intensified and protesters set fire the local legislature building on Wednesday in the capital of the southwestern state of Guerrero, over claims that the 43 students had been killed by people linked to the corrupt police.

The protestors have attacked the ruling Institutional Revolutionary Party (PRI), and criticized the Mexico's President, Pena Nieto, over how the authorities have handled the case of the missing 43 students.

The protests, which have been ongoing in many other states throughout Mexico, with protesters attacking several other state buildings, have affected country's tourism negatively, reports say.