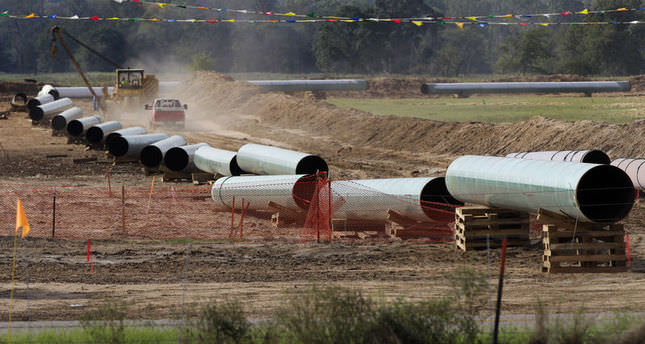 by daily sabah
Nov 19, 2014 12:00 am
The US Senate, dominated by the Democrats, has vetoed legislation that aimed to put an end to debates around the completion of the Canada-US oil pipeline, Keystone XL.


The project, which has garnered a lot of attention from environmentalist groups, aims at building a pipeline that would move oil from Alberta, Canada into Texas, U.S.

The supporters of the Keystone XL project have claimed that it would create jobs and relieve the U.S. consumers from depending on the Middle East oil. The government-backed environmental reports have suggested that the pipeline would ease environmental damage, as it would be more environmental friendly to move the oil through the pipeline, rather than using the railway.


On the other hand, the projects has received a large amount of criticism from the environmental groups who argue that Keystone XL, alongside not being a significant job producer, will harm the vast pristine landscapes, rivers and wildlife in Canada, and increase dependency on climate-killing fossil fuels.

The Senate voted 59-41 in favor of forcing the legislation, which received vast support from the Republicans last week, but failed to reach the White House, as it did not receive 60 favorable votes. The vote also sparked divide between the Democrats, as they had conflicting votes among members.


The pipeline has also become an area of dispute between the U.S. and Canada. The Canadian authorities pushed forward the project, which would stretch 1897 kilometers from Canada to the U.S. Gulf coast refineries, as it would mean additional support for the economy. But the Obama administration has not been keen on approving the project. The proposed route for the pipeline has also become an issue between the states.

Regarding the Keystone XL proposed pipeline, "We're going to let the process play itself out. And the determination will be made in the first instance by the Secretary of State. But I won't hide my opinion about this, which is that one major determinant of whether we should approve a pipeline shipping Canadian oil to world markets, not to the United States, is asking whether it contributes to the greenhouse gases that are causing climate change", said President Obama at G20 press conference, on November 16.