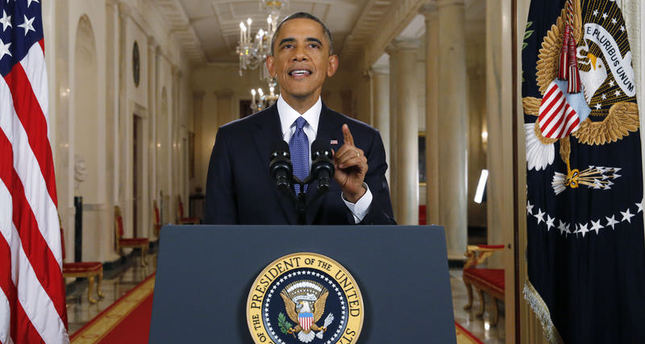 by daily sabah Nov 21, 2014 12:00 am
As Republicans in the House of Representatives continue to block a comprehensive immigration reform bill from a vote, U.S. President Barack Obama pledged to fix "the broken immigration system." Yet, President Obama needs the House's approval to put the reform plan into action.
Obama's immigration plan received a significant reaction from Republicans who accused him of acting unilaterally and exceeding his constitutional limits to enforce immigration reform. U.S. representative Paul Ryan, a leading Republican voice and a potential 2016 presidential candidate, called Obama's reform plan a "partisan bomb."

Obama responded to those in Congress who questioned the legality of his action. "To those members of Congress who question my authority to make our immigration system work better or question the wisdom of me acting where Congress has failed, I have one answer: Pass a bill," Obama said on November 20.

In his speech, Obama called the current U.S. immigration system "amnesty" stressing that millions of undocumented people have lived in the country without paying taxes. No rules are applied to them as they are not bound by any rules. "That's the real amnesty, leaving this broken system the way it is. Mass amnesty would be unfair. Mass deportation would be both impossible and contrary to our character. What I'm describing is accountability, a common-sense, middle ground approach: If you meet the criteria, you can come out of the shadows and get right with the law. If you're a criminal, you'll be deported. If you plan to enter the U.S. illegally, your chances of getting caught and sent back just went up," he said.

The immigration reform bill is expected to boost the U.S. economy while shrinking the deficit through taxes paid by immigrants under the president's plan. The action plan was passed by the Senate last year.

As part of new steps on immigration, Obama announced the stepping up of border control by supplying additional resources for our law enforcement personnel and to introduce faster procedures for high-skilled immigrants, graduates and entrepreneurs who want to stay and live in the U.S. Addressing the issue of undocumented immigrants, the plan also allows up to 4 million people to apply for a program that provides protection from deportation by allowing them to obtain work permits. However, only those who have lived in the U.S. for at least five years can apply for this program. The reform plan also lifts the limit on the age of young immigrants in order to qualify to work legally in the country while providing them with new legal protections from the U.S. government. Obama's immigration plan is expected to affect millions in the country, which has been enriched by its diverse multicultural population. The Hispanic population, living mostly in southwestern states, are likely to give huge support to the president.