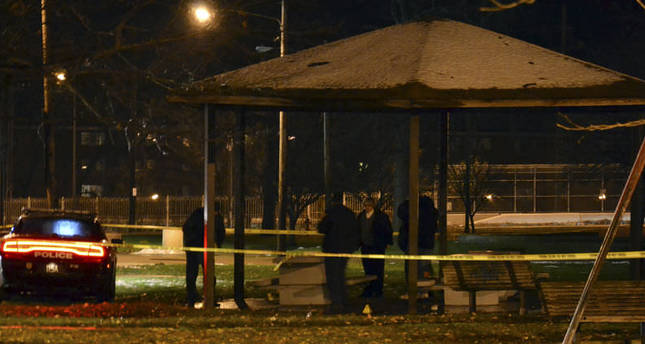 An innocent young black American boy was shot dead by a police officer in Ohio. The excessive use of force by police in the U.S. again comes to the fore

The U.S. was hit by another case of excessive force on Saturday after a 12-year-old black American boy, grabbing what turned out to be a replica gun, was shot dead by a local police officer in the U.S. city of Cleveland, Ohio. The incident was another shocking reminder of the significant use excessive of force by police in the U.S, threatening the lives of some in the black American community. The Cleveland police officers responsible for the death of the boy, named Tamir Rice, have been placed on administrative leave.

"Upon arrival on the scene, officers located the suspect and advised him to raise his hands," Cleveland police said in a statement released on Sunday, AFP reported. "The suspect did not comply with the officers' orders and reached to his waistband for the gun. Shots were fired and the suspect was struck in the torso," the statement said. "Further information reveals that the weapon which the 12-year-old suspect was in possession of was an 'airsoft' type replica gun resembling a semi-automatic pistol, with the orange safety indicator removed," it added.

Police brutality in the U.S. has become a frightening reality with the number of people murdered by heavily armed police gradually increasing in the country. There is now a long list of people who have been brutally assaulted by police officers. According to a report released by the Center for Research on Globalization, the number of Americans murdered by police has reached 5,000 in the last decade as of 2014, outnumbering American soldiers killed in Iraqi war, 4,489.

The shooting in Ohio came amid growing tension in Ferguson where a grand jury is set to announce whether a white policeman will be indicted for the fatal shooting of an unarmed black teenager in Ferguson. Before the grand jury's verdict, the Missouri governor, Jay Nixon declared state of emergency on Nov. 17 in order to prevent any violence that could erupt in the city. He also called in the National Guard troops to support police "during any period of unrest that might occur following the grand jury's decision concerning the investigation into the death of Michael Brown," in order to maintain peace and security in the town. The U.S. National guard was deployed in the restive American province of Missouri to help bring stability and order during the heavy protest in Ferguson.

During the Ferguson protest, another Afro-American man was killed by a police officer on the suspicion of carrying a knife and "behaving erratically." The killing of an unarmed 18-year-old, Michael Brown by the police in the state of Missouri on Aug. 9 caused intensified demonstrations against the police, as many angry black Americans took to the streets to protest the police shooting. The use of force by law enforcement officers and the policing of protests were investigated by human rights delegation formed by Amnesty International. The human rights organization released a new report on Oct. 24, "On the Streets of America: Human Rights Abuses in Ferguson" documenting the human rights concerns in the Ferguson protests in the wake of Brown's death.

During the Ferguson protests, freedom to report the news was also violated since the largely peaceful demonstrations sparked by the fatal police shooting of an unarmed teenager, turned the streets into a battle zone. The arrests and tear-gassing of journalists during the demonstrations revealed police abridging the freedom of the press. Many journalists were kept away by the police or barred from entering the city after the violent clashes erupted. The Ferguson case proves that the militarized police force has remained a significant issue in the U.S., as the police have responded to the demonstrations with force to counter the crowds.