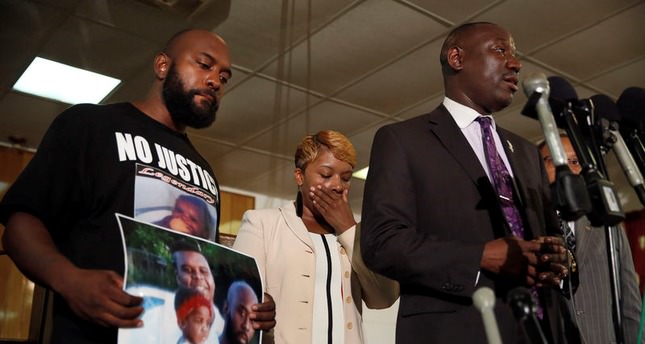 by French Press Agency - AFP
Nov 25, 2014 12:00 am
The lawyer for the family of Michael Brown denounced Tuesday the "unfair" process that resulted in no indictment for the police officer who shot and killed the unarmed black youth.

"This process is broken. This process should be indicted," Benjamin Crump told reporters, a day after a grand jury opted not to send police officer Darren Wilson to trial.

The decision prompted a night of violent unrest in the St Louis, Missouri suburb of Ferguson, as well as protests in cities around the United States.

Crump said he and his team had gone through much of the "data dump" of testimony from the prolonged, closed-door grand jury hearing into the August 2 shooting.

"We went through it as much as we could and saw how completely unfair this process was," he said.

He criticized the way Wilson had not been cross-examined when he appeared before the grand jury in September, saying "a first-year law student would have done a better job."

"When was his credibility ever challenged?" he asked.

Crump also denounced a "symbiotic relationship" between St Louis County prosecutor Robert McCulloch, who is the son of a slain police officer, and local law enforcement.

"This is not a Ferguson problem... This is a problem all over the country," he said.

He added: "We may have lost one round but the fight is not over."