No charges for US police officer ignites racial violence in Ferguson 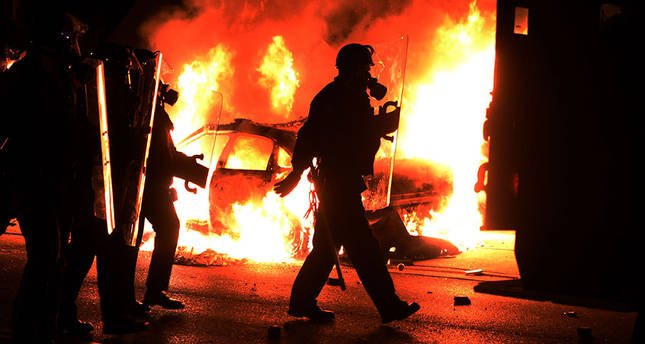 The grand jury decision not to indict the Ferguson police officer who fatally shot Michael Brown sparked violence in the riot-struck U.S. town of Ferguson. President Obama asks people to respect law enforcement in the country

Public anger in the United States spilled over on Monday as violence protests in the streets of Ferguson broke out after a grand jury spared Ferguson police officer Darren Wilson from criminal charges. With people disappointed with the grand jury's decision, many took to the streets of the violence-hit town of Ferguson in clashes between protestors and the Ferguson police that were arguably worse than those that erupted in August after the police shooting of unarmed black teenager Michael Brown.

Tension flared up and at least 12 buildings reportedly went up in flames on Monday. The peaceful demonstrations in August turned into violent attacks by protestors as the Ferguson police responded to protestors by firing tear gas and rubber bullets. Regarding the re-emergence of violent demonstrations in the town, U.S. President Barack Obama called for calm and peace in the restive Missouri town while reiterating the need to respect the court's decision and law enforcement in the country, underscoring the significance of the rule of law in the U.S.

After the decision, made by the grand jury, not to indict police officer Wilson, the St Louis County prosecutor's office released the full grand jury report. The grand jury of seven men and five women met over three months and heard more than 70 hours of testimony before giving the final decision over the fatal police shooting. The grand jury began a criminal inquiry into the police shooting of Brown on Aug. 20. Confidence in a fair investigation of the case of Michael Brown was severely hit, according to a survey conducted by the Pew Research center that was released on Aug. 27 among 1,000 adults to analyze the U.S. public reaction to the shooting of Brown. The survey found that the majority of Americans; 40 percent of whites and 65 percent of blacks think that local police went too far in the aftermath of Michael Brown's death, despite divided opinions between black and white Americans. The survey shows that confidence in the investigations into the police shooting has fallen along sharply divided lines. According to the survey, 76 percent of blacks believe that the investigation would be held unfairly.

In addition to the grand jury's decision, the U.S. Justice Department also conducted investigations into the Ferguson case.

The predominantly black small town of Ferguson, Missouri encountered racially charged civil unrest that came after Michael Brown, an unarmed black teenager, was shot to death by a white police officer on Aug. 9. Since then, tension has remained high in the city while many people waited for police officer Wilson to face criminal charges. Before the grand jury's verdict, Missouri Governor Jay Nixon declared a state of emergency on Nov. 17 in order to prevent any violence that could erupt in the town. However, the security measures that have taken place so far could not help quell the chaos.

The killing of an unarmed 18-year-old, Michael Brown, by police officer Darren Wilson in the state of Missouri on Aug. 9 caused intensified demonstrations against the police, as many angry African-Americans took to the streets to protest the police shooting. The human rights organization Amnesty International released a new report on Oct. 24, "On the Streets of America: Human Rights Abuses in Ferguson" documenting the human rights concerns in Ferguson protests in the wake of Brown's death, while drawing attention to the excessive use of force by the police.

In addition to the Michael Brown case, the Ohio police shooting of another young black American on Monday has further fuelled racial tension in the country. A 12-year-old African American boy named Tamir Rice, grabbing what turned out to be a replica gun, was shot dead by a police officer in the U.S. city of Cleveland.