Thanksgiving race with two checks a second, nine guns for 10 people in the US 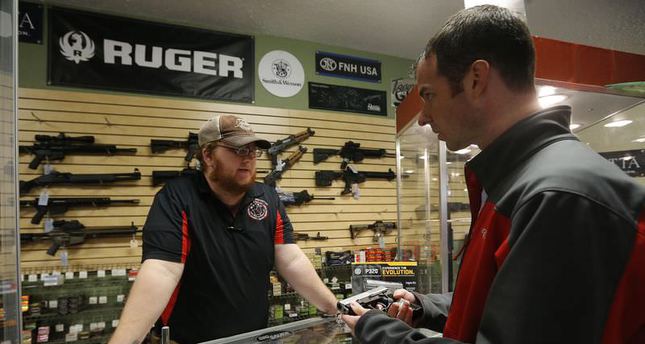 by Associated Press
Nov 26, 2014 12:00 am
The day after Thursday's U.S. Thanksgiving holiday is traditionally one of the busiest days of the year for gun purchases.

In the U.S., there are nine guns for every 10 people. Someone is killed with a firearm every 16 minutes. And every minute, gun shops make about 40 new requests for criminal background checks on people wanting weapons.

On the Friday after Thanksgiving, traditionally the first shopping day of the holiday season, the rush accelerates to nearly two checks a second, testing the limits of the National Instant Criminal Background Check System.

"We have a perfect storm coming," says Kimberly Del Greco, a manager in the FBI division that helps run the system, known as NICS.

Much of the responsibility for preventing criminals and the mentally ill from buying guns is shouldered by about 500 men and women who run the system from inside the FBI's criminal justice center, a gray office building with concrete walls and mirrored windows in West Virginia.

The Associated Press was granted a rare glimpse into the inner workings of the NICS, and was able to see first-hand why 512 gun sales a day effectively beat the system last year.

By federal law, NICS researchers must race against the clock: They have until the end of the third business day following an attempted firearm purchase to determine whether or not a buyer is eligible. After that, buyers can legally get their guns, whether or not the check was completed.

NICS did about 58,000 checks on a typical day last year. That surged to 145,000 on the Friday after Thanksgiving in 2013. They're bringing in 100 more workers than usual for the post-Thanksgiving rush this year.

The call centers have no access to privileged information about buyers' backgrounds, and make no decisions. They just type in their name, address, birthdate, Social Security Number and other information into the system. On Black Fridays, the work can be grueling: One woman took a call that lasted four hours when a dealer phoned in the maximum 99 checks.

In the years since these background checks were required, about 71 percent have found no red flags and produced instant approvals.

But ten factors can disqualify gun purchasers: a felony conviction, an arrest warrant, a documented drug problem or mental illness, undocumented immigration status, a dishonorable military discharge, a renunciation of U.S. citizenship, a restraining order, a history of domestic violence, or an indictment for any crime punishable by longer than one year of prison time.

Any sign that one of these factors could be in a buyer's background produces a red-flag. FBI researchers then investigate, scouring state records in the federal database and calling state and local authorities for more information.

"It takes a lot of effort ... for an examiner to go out and look at court reports, look at judges' documents, try to find a final disposition so we can get back to a gun dealer on whether they can sell that gun or not," Del Greco says. "And we don't always get back to them."