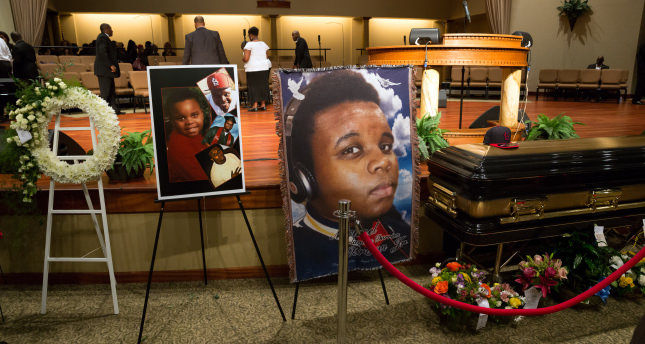 by Anadolu Agency
Nov 27, 2014 12:00 am
Riots in the St. Louis County area continued for a third straight day Wednesday, with demonstrators protesting a grand jury's decision not to indict a white police officer for fatally shooting an unarmed black teen. Unrest appeared to be less intense than on the first two nights, caused by a mixture of inclement weather, afternoon snowfall, the eve of a major holiday and a boosted troop presence.

Several arrests were reported during the protest that followed a mock trial for Officer Darren Wilson, who on Monday night avoided an indictment by a Missouri grand jury for killing 18-year-old Michael Brown. The decision sparked violent protests in Ferguson, as well as rallies in many U.S. cities including New York, Los Angeles, Boston, Washington, Chicago and Atlanta. Protests since the grand jury's decision have led to more than 400 arrests across the country.

Also on Wednesday, Brown's parents expressed frustration at Officer Wilson's version of events that led to their son's killing. In his first TV interview since the fatal shooting in August, Wilson said that he shot the teen because he perceived him as threat to his life. "The only way I can describe it is I felt like a 5-year-old holding onto Hulk Hogan," he told ABC News, adding that he had a "clean conscience" for what he did.

Speaking to NBC, Brown's mother said the officer's words were an 'insult' and 'disrespectful.' "I do not believe a word of it. I know my son far too well. Our son doesn't have a history of violence," Lesley McSpadden said in reference to Wilson's claim that Brown struggled with him inside a patrol car and reached for the officer's gun. Brown's father also said he felt the prosecutors "crucified" his son's character.

Meanwhile, Missouri Governor Jay Nixon is facing criticism for what is described as a delayed deployment of a larger number of National Guard troops to Ferguson before the announcement of the grand jury's decision. "The National Guard was not deployed in enough time to save all our businesses," Ferguson Mayor James Knowles said, calling the initial response to the protests "deeply disturbing."

Nixon ordered and additional 2,200 troops to the region on Tuesday, up from 700 on Monday, when hundreds of angry protesters poured into the streets of Ferguson. Area businesses were looted, as well as cars and buildings set on fire and dozens of arrests on the first night of protests. The state's Lt. Governor Peter Kinder also joined Knowles on Wednesday and said Nixon is to blame for not deploying enough troops before the unrest.

Michael Brown's death at the hands of a police officer turned the tragedy into a symbol that represents the killing of all black teenagers by police officers. Brown's killing was not the first such case of an unarmed black male killed by a white police officer, and it will not be the last in a country that still struggles to deal with racial inequalities 150 years since its former slaves were freed. Since that fateful day in August, there have been at least 6 black teenagers who were shot and killed by police officers in the United States, according to The Daily Beast.

The FBI's "justifiable homicide database" shows between 2005 and 2012, an average of 96 blacks were killed each year by a white police officer, and 2013 saw these deaths increase for a third consecutive year. Recent studies have shown that young black males are 21 times more likely to be killed by police than their white teen counterparts. University of California, Berkeley professor Hatem Bazian said blacks killed by police is a phenomenon that has become commonplace. "The numbers are just constantly piling up, and that can be seen in the newspapers daily, as African-Americans have been shot by the police for a variety of reasons," he said. These killings have turned into "routine" news, he added.

Of the 6 black teens who have been killed by police since August 9, the victims ranged in age from as old as 19 to as young as 12-year-old Tamir Rice. Tamir was shot and killed November 22 by a Cleveland police officer who mistook the toy gun Tamir was holding for a real gun. After the shooting he radioed that the victim was approximately 20 years old.

A snapshot of the other victims of deadly police shootings include: Fourteen-year-old Cameron Tillman who was shot dead September 21 after police received a call about trespassers armed with weapons entering an abandoned home in Terrebonne, Louisiana. A gun Cameron had in his possession was a toy. Laquan McDonald was 17 when he was shot dead by a Chicago police officer for breaking into cars and refusing to drop a knife he was holding. VonDerrit Myers Jr. was shot in the head in early October, just miles from where Michael Brown died two months earlier. An off-duty officer said the 18-year-old fired three rounds at him before the officer returned with 17 shots. Myers' family contends he did nothing wrong and was carrying only a sandwich in his hand. Qusean Whitten, 18, was killed for trying to rob a store in Ohio in October. Roshad McIntosh from Chicago was killed at the end of August after reportedly pulling a gun on officers. The 19-year-old's family claimed he was kneeling on the ground with his hands in the air. McIntosh's family's claims are eerily similar to those of some of the witness accounts of the Brown shooting.