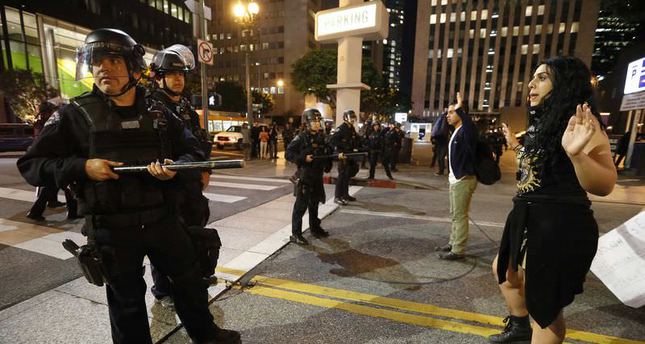 by AA Nov 28, 2014 12:00 am
The UN Committee against Torture has urged U.S. authorities to investigate police brutality and excessive use of force involved in the shootings of unarmed people belonging to certain racial and ethnic groups.

The call came on Friday in the wake of unrest in U.S. cities following a court decision in Missouri not to charge white police officer Darren Wilson for shooting dead unarmed 18-year-old black teenager Michael Brown in Ferguson.

The committee said in a report: "The Committee is concerned about numerous reports of police brutality and excessive use of force by law enforcement officials, in particular against persons belonging to certain racial and ethnic groups."

It stated there had been "frequent and recurrent police shootings or fatal pursuits of unarmed black individuals".

More than 330 police officers were prosecuted over the past five years after 20 investigations were opened into allegations of systematic violations by police departments, according to information provided by the U.S. delegation to the UN committee.

The report said: "The committee is concerned about numerous, consistent reports that police have used electrical discharge weapons (tasers) against unarmed individuals who resist arrest or fail to comply immediately with commands, suspects fleeing minor crime scenes or even minors."

"The committee is appalled at the number of reported deaths after the use of electrical discharge weapons."

"The U.S. should ensure that tasers are used only where there is an extreme and limited situations and immediate threat," the report added.

The committee said the U.S. should ensure that all instances of police brutality and excessive use of force by law enforcement officers are investigated promptly, effectively and impartially.

The committee also expressed its "deep concern" about the fact it continued to hold individuals without charge at the Guantanamo Bay detention facilities in Cuba.

According the U.S. delegation, 148 men are still held at the facility but "only 33 have been designated for potential prosecution, either in federal court or by military commissions - a system that fails to meet international fair trial standards".

The report said the U.S. is "encouraged to establish a moratorium on executions with a view to abolish the death penalty".