Hundreds of thousands march to ask for military intervention in Brazil 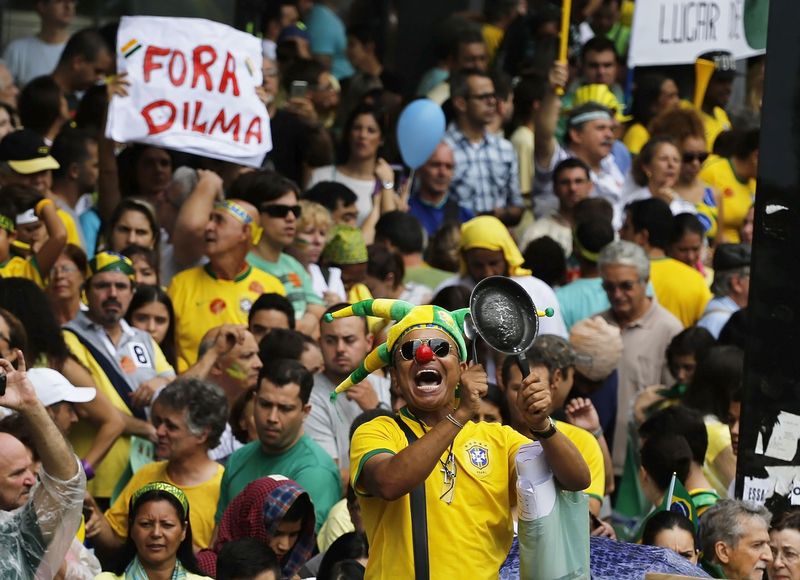 by Daily Sabah with Agencies Mar 15, 2015 12:00 am
Hundreds of thousands of Brazilian protestors marched on Sunday in over 50 cities around the country to demand President Dilma Rousseff's impeachment and called for a military intervention for her ouster.

The biggest protests were in Sao Paulo, an opposition stronghold where hundreds of thousands gathered on a main avenue, as well as in the capital city of Brasilia and in Rio de Janeiro.

Dozens of cities saw demonstrations gathering together a few thousand people each. According to the website of the Globo TV network, Brazil's largest, the total number in the streets across Brazil was over 300,000 people, based on local police estimates.

In Rio, police estimated 15,000 people marched along the golden sands of Copacabana beach, where they waved Brazilian flags and many openly called for a military coup to dissolve the government.

"I don't want my country to turn into a Venezuela, we don't want an authoritarian government!" said Marlon Aymes, 35, helping carry a 20-foot long banner that read in English: "Army, Navy and Air Force. Please Save Us Once Again of Communism."

"We want the military to dissolve Congress and call new elections, because the level of corruption is too widespread to do anything else," Aymes added.

The protestors called for Rousseff to be impeached and to voiced anger at a kickback scheme at state-run oil company Petrobras, which prosecutors call the biggest corruption scheme ever uncovered in Brazil.

However, experts and Brazil's top opposition political figures, including a former president and the top candidates who ran against Rousseff in last year's election, say impeachment is undesirable, because the president isn't accused of any connection to the Petrobras scandal, and because it could affect Brazil's stability.

Vice President Michel Temer on Friday labeled the demand for the president to be impeached as "impossible and unthinkable" and most experts say there is no legal basis for impeachment, as the president has not been found guilty of a crime.

CUT President Vagner Freitas also criticized those who continue to query October's general election result. "Protesting is a part of a democracy, but we cannot live in this climate of 'electoral limbo' for the rest of our lives," Freitas said.

"If people want change, they have to urge alterations to economic policy and other aspects of the administration."

Rousseff's administration, formed of a fickle multi-party coalition, has been plagued with internal rebellions, but a decision by the Supreme Court last week to investigate senior political figures -- including congressional leaders and a former president, for allegations of involvement in a vast kickback scheme at Petrobras -- have also taken their toll politically and economically.

Earlier, President Rousseff said that she believed corruption at the country's scandal-hit oil company, Petrobras, could have been halted if investigations had been ordered in the 1990s.

"If, in 1996 and 1997, they had investigated and handed down punishments at that time, there would not have been the case whereby this member of Petrobras staff engaged in acts of corruption for over 20 years," she said.

Uncertainty about whether the government will be able to politically push forward with fiscal policy aimed at kickstarting the country's economy, which is predicted to contract by more than 0.6 percent this year and see inflation near 8 percent, has continued to spook the markets, with Brazil's currency, the real, weakening significantly against a strong U.S. dollar.

The prospect of mass protests returning to Brazil's streets has also put pressure on the currency. The dollar was quoted at 3.24 reais at 5 p.m in São Paulo (GMT2000), the dollar's highest rate against the real since April 2003 and 6 percent higher than at the start of the week.