US real estate tycoon charged with murder after TV 'confession' 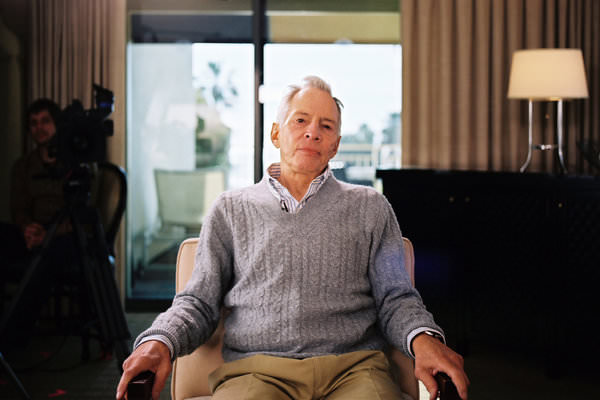 by Mar 17, 2015 12:00 am
An eccentric US tycoon was charged Monday over the execution-style killing of a mobster's daughter and could face death if found guilty, in the latest installment of a TV murder mystery which has captivated America.

Robert Durst, 71, the scion of a New York real estate dynasty worth $4.4 billion, was charged in Los Angeles with murder over the 2000 death of his close friend Susan Berman, after he was arrested in New Orleans on Saturday. He is awaiting extradition to California.

Durst appeared to make an unwitting confession to a catalogue of killings during filming of the final episode of the acclaimed six-part HBO documentary "The Jinx: The Life and Deaths of Robert Durst."

In the finale, broadcast on Sunday, Durst is heard muttering to himself, "What the hell did I do? Killed them all, of course" -- apparently unaware that a wireless microphone remained switched on while he used the bathroom.

It was not clear if Durst was sincerely confessing, but authorities in Los Angeles reportedly said the television documentary had played a role in their decision to seek the multimillionaire's arrest for Berman's murder.

"Bob Durst didn't kill Susan Berman. He's ready to end all of the rumor and speculation," DeGuerin said outside a courthouse in New Orleans after Durst had waived his right to challenge extradition to the western US state.

"We're ready to go to California and have a trial," DeGuerin added.

Durst's extradition may be delayed however by the possibility of authorities in New Orleans filing weapons charges against him.

In Los Angeles, Durst was charged with the murder of Berman, the District Attorney's Office said, citing special circumstances which make him eligible for the death penalty, although prosecutors will only decide on that later.

Berman was shot in the back of her head at her home in Beverly Hills, a day before she was due to be questioned by police who had reopened an investigation into the 1982 disappearance of the tycoon's wife, Kathie Durst, in New York.

The HBO documentary uncovered evidence suggesting Berman, whose father was an associate of notorious Las Vegas gangster Bugsy Siegel, had provided a false alibi for Durst following his wife's mysterious disappearance, which occurred shortly after she signaled her intention to seek divorce.

However any attempts to link Durst to the disappearance had foundered until the investigation was reopened in 2000, shortly before Berman was killed.

A year later, Durst was arrested in Texas after the dismembered body of an elderly neighbor was found floating in sacks in Galveston Bay.

Durst was released after making bail but failed to attend subsequent court appearances and became a fugitive.

He was eventually arrested in November 2001 after stealing a chicken sandwich from a supermarket, despite having $500 cash in his pocket and more than $37,000 stuffed into bags in the trunk of his car.

Despite the mountain of evidence against him Durst was acquitted of murdering his neighbor after his lawyers successfully argued he had acted in self-defense.

"Jinx" director Andrew Jarecki told ABC television that he and his film crew were unaware of the apparent audiotape confession until discovering it while reviewing hours of recordings.

"I sat there in the edit room with my partners and we just sort of shook our heads and it took a while to really understand the impact of it. It was so chilling to hear it," Jarecki said.

He told ABC that the incriminating statement, which came during their second and final interview of Durst, led them to notify authorities.
FBI agents believe Durst may have been planning to flee the United States because he registered under an alias at the New Orleans hotel where he was arrested, paid with cash and was found with fake documents, a source told ABC News.

In a statement to ABC, Douglas Durst, who runs the family real estate empire, said his brother should pay for his alleged crimes.

"We are relieved and also grateful to everyone who assisted in the arrest of Robert Durst," the statement said.

"We hope he will finally be held accountable for all he has done."