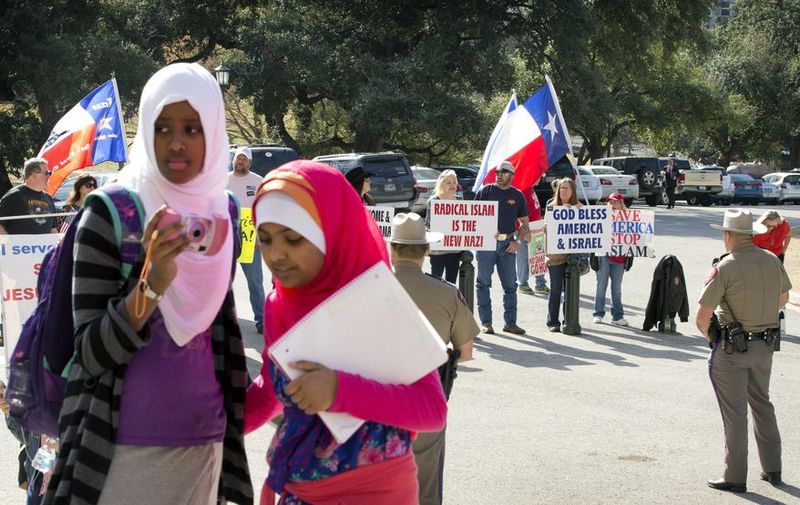 by Daily Sabah with AA Mar 24, 2015 12:00 am
The Muslim community in Texas, U.S. has raised concerns over a public hearing which proposed a bill to void the application of foreign laws in the state courts, that the 'anti-foreign law' will fuel Islamophobia, on Tuesday.

Nicknamed "American Laws For American Courts," the bill proposed by Republican politician Jeff Leach seeks to forbid the use of foreign laws in civil matters and to codify the supreme authority of U.S. law.

Although the bill does not specifically refer to any religion, many believe it is a reaction to a voluntary "Islamic Tribunal" operating in Texas with the purpose of resolving Muslims' civil disputes in family and business matters in a non-binding way.

"We have seen a pattern of politicians across the country and also here in Texas who use these type of issues to score points with the right wing conservative political basis," said Alia Salem, who directs the North Texas chapter of the Council on American-Islamic Relations, the country's largest Muslim advocacy group.

Salem was scheduled to testify against the bill before the Committee on Judiciary & Civil Jurisprudence on Tuesday.

She said the introduction of similar bills has been a way for politicians to "gain credibility" and become "a kind of hero defending the Christian agenda against the infiltration of Muslims into American society."

Last week, the town of Irving, Texas, voted to support the legislation. Irving Mayor Beth Van Duyne immediately became a hero among firebrand conservatives, with some on Twitter describing her as #IrvingIronLady.

"The fundamental principles that formed our nation, protect our rights and guarantee liberties unmatched anywhere must not be sacrificed as our nation embraces other cultures. Reaffirming that our courts will consider matters based on AMERICAN laws and statutes is, therefore, necessary," Van Duyne posted on Facebook.

If the bill passes committee, the legislation will go for a vote at the state House of Representatives.

Salem said the main intention behind introducing the bill is to marginalize the Muslim community and restrict their rights.
Last Update: Mar 25, 2015 10:54 am
RELATED TOPICS