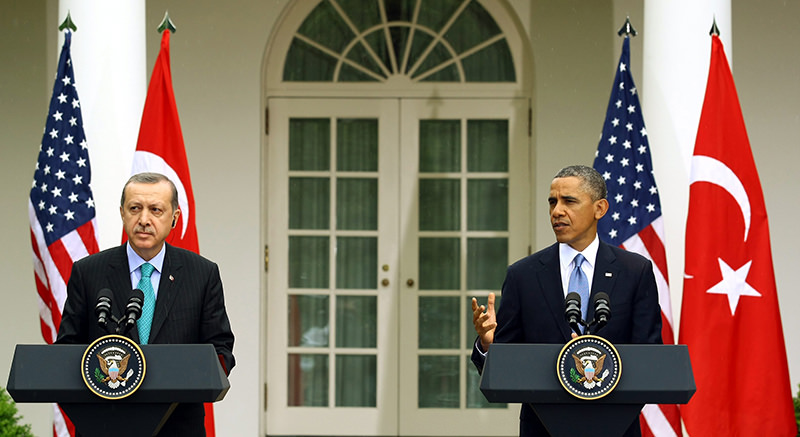 by Anadolu Agency Apr 20, 2015 12:00 am
The presidents of Turkey and the U.S. will open the Turkish-American Culture and Civilization Center in Maryland, Turkey's foreign minister said Sunday.

Mevlüt Çavuşoğlu visited the center that also has a middle-sized mosque on a three-day visit to Washington, and lunched with representatives from the American Muslim community.

"During a phone call, President (Recep Tayyip) Erdoğan asked President (Barack) Obama to accompany him in opening the center together and President Obama accepted his offer'in principle,'" Çavuşoğlu told the representatives.

If Obama's schedule allows at the time of the opening, he will accompany Erdoğan.

The complex is built on a large area and consists of a coffee house, gift shops, cultural center, amphitheater and exhibition hall, computer lab, library, Turkish bath/hamam and guest house.

Çavuşoğlu said the center has been constructed as a place where all Muslims in the U.S. could come together and worship freely.

He said Muslims have faced increased challenges across the world, particularly due to rising Islamophobia.

"Our duty is to tell the true Islam which is a religion of peace. Islam does not tolerate terrorism. But unfortunately al-Qaeda and ISIS terror groups have tarnished the image of Islam," he said.

The self-proclaimed Islamic State of Iraq and al-Sham (ISIS) is neither Islamic nor is a state, he added.

Francis said on Sunday that "the first genocide of the 20th century" had struck Armenians, referring to events that took place during World War I when a portion of the Armenian population living in the Ottoman Empire sided with invading Russians and revolted against the empire.

Armenia has demanded an apology and compensation, while Turkey has officially refuted Armenian allegations about the incidents saying that although Armenians died during the relocations, many Turks also lost their lives in attacks carried out by Armenian gangs in Anatolia.

Ankara agrees there were Armenian casualties during World War I but says it is impossible to define these events as "genocide."

The European Parliament also passed a resolution recognizing the 1915 events as "genocide."

Referring to the resolution by the pope and European Parliament, Cavusoglu said recent anti-Turkey propaganda showed that it makes a big difference when Muslims are victims or subject of an event.

There is a clear double standard against Muslims, he said.