Clashes between Baltimore police, protestors continue for a second night 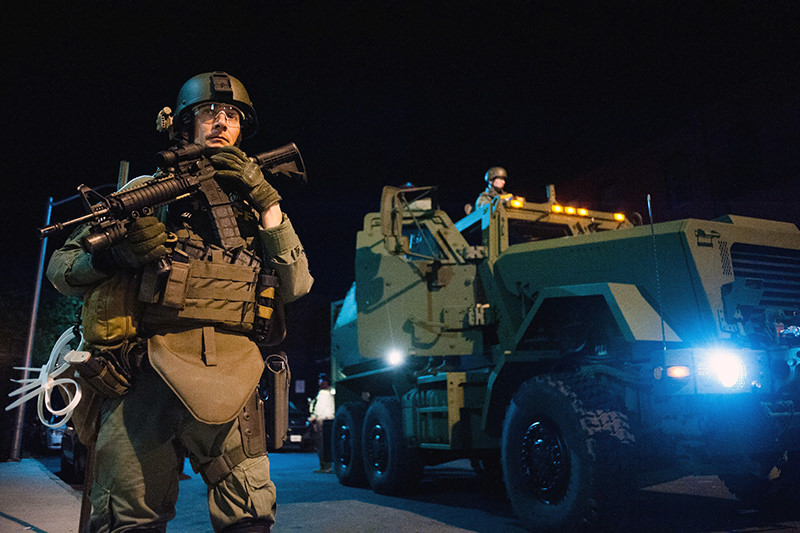 | EPA Photo
by Anadolu Agency Apr 29, 2015 12:00 am
There were clashes for the second night running on the streets of Baltimore on Tuesday night as around 100 defied a curfew to confront police.

Around 100 protesters, mostly teenagers, gathered in the northwest of the city shortly after the 10 p.m. curfew began and threw rocks, bottles and fireworks at officers.

Police responded with pepper spray, according to an Anadolu Agency reporter at the scene, and officers in riot gear moved in to disperse the crowd.

Local businesses remained shuttered. Earlier it was announced that Wednesday's Baltimore Orioles game against the Chicago White Sox would be closed to the public - a first in the history of Major League Baseball - and a weekend game that was to be played in Baltimore was moved.

Throughout the day, residents gathered at a local drug store that had been looted on Monday night to clean the streets and stores of remaining debris.

"The intentions are to rebuild Baltimore," local resident Cara, who declined to give her surname, told the Anadolu Agency. "Yesterday we have seen children tear down, now the adults are going to get out here-do their part to take responsibility and clean up for the children's mess."

Rioting broke out after the funeral of Freddie Gray on Monday. The African-American died in hospital on April 12 after receiving spinal and other injuries while in police custody.

The National Guard was deployed around City Hall, where looting and clashes took place, while Baltimore police control the rest of the city.

Police reported 235 arrests on Monday evening, with 20 officers injured and more than a dozen buildings set on fire. More than 140 vehicles, including police patrol cars, were also vandalized.

Most shopping malls and stores in the city remained closed and schools were also shut in an effort to stem fresh rioting.

In Washington D.C., President Barack Obama condemned Monday's violence. "When individuals get crowbars and start prying open doors to loot, they're not protesting, they're not making a statement, they're stealing," he said.

"That is not a protest, that is not a statement, it's a handful of people taking advantage of the situation for their own purposes and they need to be treated as criminals."

The president said that since last August, when black teen Michael Brown was fatally shot by a white police officer in Ferguson, Missouri, there have been "too many instances of what appears to be police officers interacting with individuals, primarily African-American, often poor, in ways that raise troubling questions."

Several religious and civil rights organizations, including the National Association for the Advancement of Colored People and the Nation of Islam, reportedly came to the city to help restore calm.

Nation of Islam member Muhammad Abdul said he came to the city to help restore peace, particularly among the city's young.

"Police are killing black youth, the protestors commit violence in a way to balance the police brutality but this is not a proper way to respond," he said.

Jacky Folk, 37, added: "I have been in Baltimore for more than four-and-a-half years. This city is the most segregated city I have ever lived in.