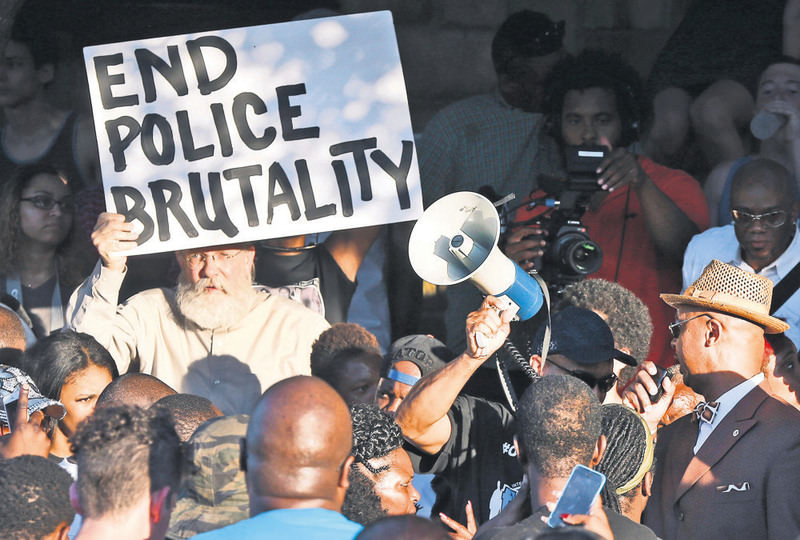 Police brutality in Texas sparked outrage across the country and masses organized demonstrations.
by Lila Hassan Jun 10, 2015 12:00 am

Police officer Eric Casebolt resigned from his position after a video emerged of him using excessive force on African-American teenagers at a pool party in McKinney, Texas, that caused outrage across the country

In McKinney, Texas, police officer Cpl. Eric Casebolt has resigned from his position, his attorney Jane Bishken said Tuesday. Casebolt had already been placed on administrative leave Sunday, pending an internal affairs investigation that has since been closed.

Sparking national outrage, Casebolt, who is white, aggressively accosted teenagers in McKinney, Texas, while responding to a complaint about a pool party they were attending at Craig Ranch North Community Pool, which is a private pool. In a statement released on their Facebook page, the McKinney Police Department said: "The initial call came in as a disturbance involving multiple juveniles at the location, who do not live in the area or have permission to be there, refusing to leave."

A dispute broke out, several witnesses say, after white residents and neighbors voiced anger at the African-Americans' presence and cast racial slurs. According to the host of the pool party, Tatiana Rhodes, one white resident called her a "black f*cker" and said she should "go back to [her] section 8 home," which is a form of low income, public housing.

In a cell phone video recorded by Brandon Brooks, 15, at the party and later uploaded to YouTube, Casebolt is seen chasing the adolescents and shouting obscenities and commands. Casebolt is seen wrestling a young African-American teenager, wearing only a bikini, to the ground, screaming: "On your face!" as he pulls her hair and slams her face into the ground. He proceeds to sit on top of the girl and press his knee into her back as she weeps, handcuffing her while she lies on the floor. He friends were screaming in protest, and Casebolt pulled a gun on another African-American teenager who was protesting the treatment.

Casebolt's behaviour in the video has been described as "indefensible" by McKinney Police Chief Greg Conley at a news conference on Tuesday. "Our policies, our training, our practice, do not support his actions," he added. He also said it is too soon to say whether Casebolt will face charges.

This newest incident has brought more attention to the national discussion in the U.S. of police force and brutality and race.

On Monday, a day before Casebolt resigned, a grand jury in South Carolina indicted police officer Michael Slager for murder for shooting and killing an unarmed African-American man, Walter Scott, while fleeing. The incident was recorded by a bystander and caused outrage and sparked protests calling for Slager's indictment.

Scott's death reflected the sentiments and fury of the Michael Brown case in Ferguson, Missouri, where a white police officer killed an unarmed black teenager last August. It also echoes the national protests and outcry caused by the deaths of other black men at the hands of police, including Eric Garner in New York and Freddie Gray in Baltimore.

Unlike the cases of Scott, Brown, and Garner, no one was killed in the Texas pool party incident, which the Daily Show, a popular evening political satire show hosted by Jon Steward, called "progress."

However, unnecessary force against African-Americans remains at the forefront of discussions.

Representatives from organizations Justice Seekers and Next Generation Action Network spoke on Monday outside the McKinney Police Department in Texas, demanding action against Casebolt.

Community and civil-rights activists have also demanded a review of the entire McKinney Police Department, investigating whether or not it has a race problem.

The Texas pool party video also sparked a new discussion about the role of civil and residential racial segregation in the incident.

"I think a bunch of white parents were angry that a bunch of black kids who don't live in the neighborhood were in the pool," Brooks, the 15-year-old who recorded the video that went viral, told BuzzFeed.

According to a 2012 study by the Institute on Metropolitan Opportunity at the University of Minnesota Law School, data suggest that suburbs are becoming increasingly diverse, with around 44 percent of American suburban residents living in communities that are 20 percent to 60 percent non-white.

The study also suggested that re-segregation trends, in which diversifying regions pass a threshold and then become predominantly non-white instead of diverse as seen in Ferguson, Missouri a couple of decades ago, are continuing.

According to another Pew Research Center study, black Americans' incomes have gone up slightly, but their wealth has remained low, leaving a large wealth gap between them and their white counterparts.

Despite this climb in diversity, residential segregation by income, and hence race, some say, may be the underlying tensions that caused the dispute at the pool party that led to police intervention.

In an email to the Christian Science Monitor, Professor Edward Blakely of urban policy at the United States Studies Centre in Sydney, Australia wrote that what happened at the pool party in McKinney "is not new or rare in the changing economic demographics of black and white America."

He added: "Gated communities, private communities, and private pools are a continuation of an attempt at racial division. But as blacks climb the [economic] ladder, race-space wars will heat up because no gates or fences will work anymore."
Last Update: Jun 10, 2015 10:58 pm
RELATED TOPICS