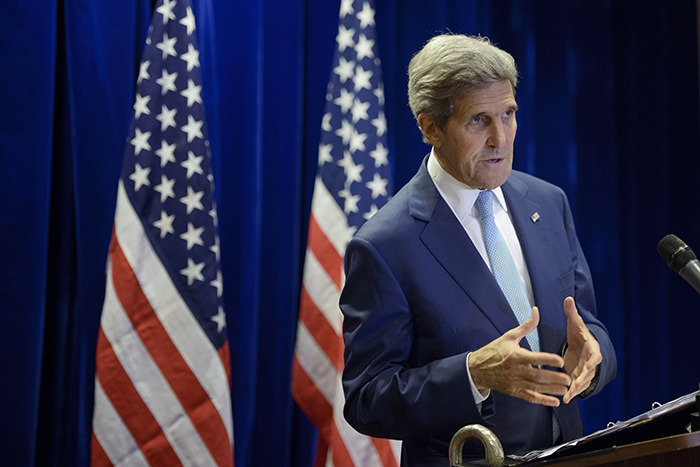 by Aug 06, 2015 12:00 am
United States Secretary of State John Kerry said Thursday he had reached an agreement with his Russian counterpart that could see the UN set up a panel to identify those behind deadly chlorine gas attacks in Syria.

"We also talked about the UN resolution and indeed I believe reached an agreement that should try to see that resolution voted shortly, which would create a process of accountability which has been missing," Kerry said a day after talks with Russia's Sergei Lavrov in Malaysia.

The UN Security Council could vote this week on a resolution to establish the panel, aimed at bringing to justice whoever was behind the use of the chemical weapons.

The United States has presented a draft resolution to the 15-member UN Security Council that calls for it to set up a taskforce to "identify to the greatest extent feasible, individuals, entities, groups, or governments" involved in the use of chemical weapons.

But doing so would need support from Moscow, a staunch ally of Syrian leader Bashar al-Assad. Russia, like the United States, wields a UN Security Council veto.

"So what we are trying to do is to get beyond the mere finding of the fact that it may have been used, and actually find out who used it, and designate accountability for its use," Kerry told reporters after a regional security forum in Malaysia.

"And what we will achieve, we believe, with this resolution is the creation of mechanism which actually enables us to do that. That is our hope."

Pressure has been mounting on the Security Council to take action in Syria, where the war is now in its fifth year and has claimed more than 230,000 lives.

Britain, France and the United States have repeatedly accused the Assad regime of carrying out the chlorine attacks by using barrel bombs thrown from helicopters.

The three countries argue that only the Syrian regime has helicopters, but Russia maintains there is no solid proof that Damascus is behind the attacks.

Russia has said that it backs a move to determine who is responsible for the chlorine attacks and has been in talks with the US on the proposed resolution.

A Russian Foreign Ministry spokeswoman confirmed the issue was discussed.

"All I can say is that an agreement like this can only be made by the UN Security Council," said Maria Zakharova.
Last Update: Aug 06, 2015 1:50 pm
RELATED TOPICS