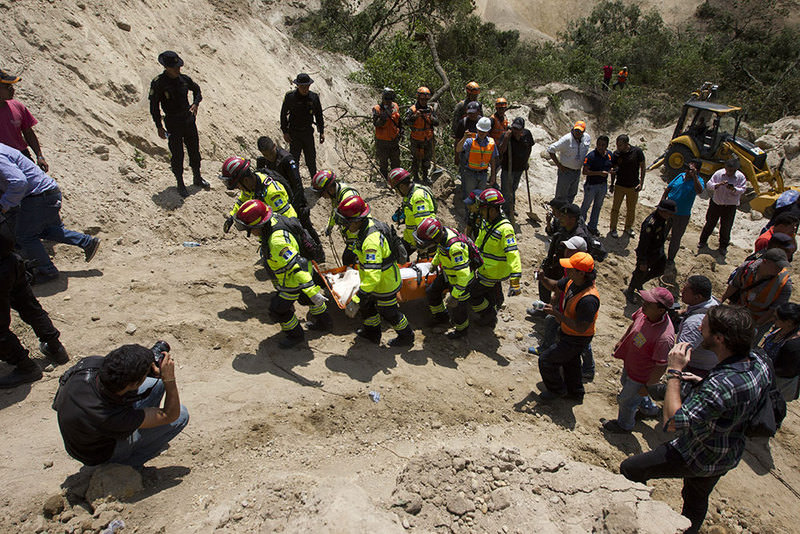 by Associated Press
Oct 02, 2015 12:00 am
A rain-sodden hillside hundreds of feet tall collapsed onto a neighborhood on the outskirts of Guatemala's capital, killing at least nine people and leaving dozens more missing.

Rescue workers used shovels and backhoes in a desperate effort to reach survivors Friday, pulling one man alive from the rubble of his collapsed home more than 15 hours after the landslide hit late Thursday.

The hill that towers over the village of Cambray, about 10 miles (15 kilometers) east of Guatemala City, partly collapsed onto a 200-foot (60-meter) stretch of the hamlet just before midnight, burying an estimated 68 homes.

The man pulled alive from the wreckage, Rony Pu, 23, was rescued from a home near the edge of mudflow. At its center, the landslide buried houses under a layer of rocks and earth as much as 50 feet (15 meters) deep.

Raul Rodas, an assistant village mayor, said about 150 families had lived in the area where the mudslide occurred, but didn't know how many might be trapped.

Julio Sanchez, spokesman for the Guatemala's volunteer firefighters, said 36 people were injured and taken to hospitals, while the nine dead were carried to an improvised morgue where weeping relatives identified their bodies.

Early in the day, Marleni Pu, 25, stood at the edge of the mudslide, her face swollen with weeping.

"My uncles, my cousins, my nieces and nephews are all there," she said, looking across the field of debris where about two dozen relatives had lived. "Six houses where my relatives lived are all under the hillside now."

Then searcher dug out her relative, Rony Pu, and took him on a stretcher to a hospital. He had apparently been trapped in an air pocket, face down and unable to move.

Some of the untouched homes in the village, which sits on the edge of a small river, were abandoned by their owners for fear of further mudslides.